Irene Dalis in recital, for collectors and everyone else 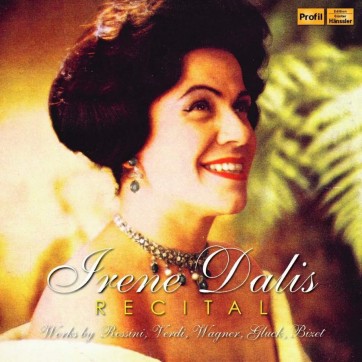 This priceless CD illustrates, as if that were still necessary, and strongly underscore the consummate vocal and dramatic mastery of this great American mezzo of the 50’s and 60’s. It offers us, unfortunately, only a few limited examples and vocal fragments of a young and still developing Irene Dalis.

Enhanced by long excerpts from Carmen (eight of them), sung in German, which come to us straight from Oldenburg (but can we be sure of that, given the amount of tampering involved ?) where Dalis studied from 1953-55. It’s truly too little and truly a shame. But what can we do ? A few pirated recordings, if they exist (they surely must) plus some YouTube videos, would help satisfy our appetites, since these 14 excerpts are all that we have on CD from this immense talent who recorded very little in her career. Let’s not forget however, the admirable complete Parsifal, winner in France of the 1964 Grand Prix du Disque, featuring Dalis, Jess Thomas, Hans Hotter/Hans Knappersbusch, in which she was the first American Kundry to appear at Bayreuth; in fact, she was the first American to perform there at all.

Born in San Jose, California, in 1925, Irene Dalis studied first in the US with Edyth Walker and Paul Althouse, then in Europe with Otto Mueller and Margarete Klose. In 1953, she obtained a contract at the Stadstheater in Oldenburg where she studied for the following two years and at 28, made her debut as Eboli, which quickly became one of her signature roles. Kurt Herbert Adler, General Director of San Francisco Opera and a fine connoisseur of vocal talent, offered her a contract in 1958 (once again to sing Eboli, this time with Gencer, Ferraro, Guarrera, Tozzi/G.Sebastian). Next would come a solid career at the Met, where she sang more than 28 roles, in 274 performances. She would be Brangane to Birgit Nilsson’s first Isolde; Amneris in Leontyne Price’s first Aida; the Princess de Bouillon for Plácido Domingo’s debut in Adriana Lecouvreur, etc., etc.  When she retired, Dalis returned to California where, in 1976, she founded Opera San Jose, which she modeled after Oldenburg.

In listening to this CD, one is immediately captivated, then charmed, at times disturbed by the bravura and bite of Ihr Götter ew’ger Nacht (in French, Divinités du Styx), by this large, dark voice, deftly modulated, its middle superbly well-placed, voluptuous, nimble, with caressing subtleties (Printemps qui commence, Mon coeur s’ouvre à ta voix… two pearls, two delights); by the heroism and bitterly scathing audacity of the O don fatale; by the full, violent low register but also the round, rich warmth of the higher notes of her Brangane (a completely painless and imperceptible passaggio from chest to head voice.) And how well she knew “to inhabit” her roles! Delilah, Amneris, Eboli, but also Brangane, Jenufa, Ortrud, the Nurse (Die Frau Ohne Schatten)…etc…

A CD that foreshadows what Dalis was to become in the future– of which, alas, too few recordings remain, leaving us hungry for more– but a disc unquestionably priceless for collectors and everyone else.