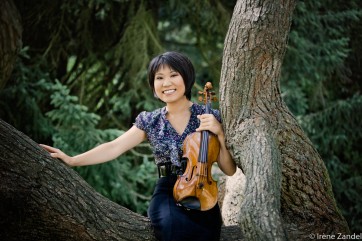 Yang brought a devilish and almost unhinged quality to the dancing second movement of Britten’s Violin Concerto, which further highlighted her amazing virtuosity.

The current Helsinki season has been almost an embarrassment of riches for lovers of Britten’s Violin Concerto. Several weeks ago, Helsinki audiences were treated to Vilde Frang’s arguably definitive and breathtaking account of this masterpiece with the Finnish Radio Symphony Orchestra. Expectations were naturally high to hear Tianwa Yang’s take on this work, this time accompanied by the Helsinki Philharmonic.

Mendelssohn’s The Hebrides was the opening work on the program. Under Gerts’ direction, the opening measures were weighty and grounded, with particularly plangent woodwinds. Textures were rich and transparent, and the buildup to the final recapitulation was memorably exciting.

The deep seriousness of Britten’s Violin Concerto provided a contrast to Mendelssohn’s boisterous curtain-raiser. The long opening line of the concerto was played confidently but tentatively, which served as a foil to Yang’s seemingly romantic approach to this piece. Throughout the first movement, Yang gave Britten’s percussive violin writing a full and gutsy sound, and played con passione throughout the numerous virtuosic passages. Yang also paid special emphasis to the grinding dissonances in the mournful passage before the final return to D major. Under Gerts’ direction, the orchestral tuttis were full-bodied and emphatic continuations of the musical argument.

Yang brought a devilish and almost unhinged quality to the dancing second movement, which further highlighted her amazing virtuosity particularly in Britten’s rapid and treacherous double-stop runs. Yang’s playing was extraordinarily delicate in the opening of the third movement passacaglia, which contrasted with her textbook right-hand articulations in the rapid passages. Yang’s interpretation of the tonally ambiguous final pages sounded strained and almost anguished. Overall, this was an equally effective but considerably different approach compared with Frang’s from just a few weeks ago.

While Schumann’s symphonies are established in the symphonic repertoire, they do not receive the same kind of exposure as Beethoven’s essays in the same genre. This is a bit of a shame, as this evening’s performance of Schumann’s Symphony No. 4 demonstrated just how very effective the composer could be in this medium.

Gerts infused a sense of great expectation in the symphony’s opening measures, which was balanced by exciting but disciplined playing in the movement proper. The simple beauty of the second movement flowed naturally, which contrasted with the somewhat jagged nature of the third movement. Gerts captured not only the anticipation in the magical transition into the fourth movement but also the unbridled energy that closed the work.