Relishing the extremes : Hannu Lintu in Mahler’s Symphony No. 6 with the Finnish RSO 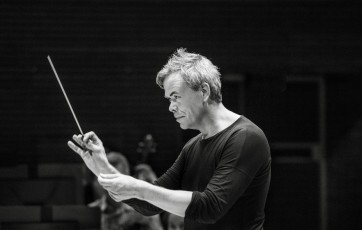 Both Lintu and the orchestra pulled out all the stops in the sprawling final movement.

The winters are long and dark in Finland. Coincidence or not, Mahler’s Symphony No. 6, the composer’s bleakest, seems to be performed on an annual basis in Helsinki. Whatever the reason, this work gives orchestras and conductors ample opportunity to display their technical prowess, physical and emotional stamina, and interpretive insight.

Lintu’s take on the opening march was fairly broad in tempo. The stomping lower strings were heavy but executed with a cold, almost military precision. Lintu took this same precision to the soaring « Alma theme; » the accompaniment was slightly heavy-handed but seemed appropriate in light of the preceding march. The central pastoral episodes were perhaps a bit too relaxed for some tastes, but provided extra contrast at the return of the opening tempo. Lintu held nothing back in the soaring final pages of this movement; it almost seemed like this was the catharsis of the entire work.

The Andante was placed second in this performance. Similar to the opening march, Lintu chose a rather broad tempo for this movement. The opening pages were extraordinarily delicate and gentle, almost frozen in time, and created a world as far removed as possible from that of the first movement. While this approach created some moments of almost unbearable yearning, there were also moments when the music seemed lost in reverie.

The Scherzo seemed especially jarring after Lintu’s dreamy Andante. The extremes that Lintu relished in in the first two movements seemed somewhat tempered here, but the militaristic emphasis to the march textures were maintained, and woodwinds were sharp and focused.

Both Lintu and the orchestra pulled out all the stops (with a notable exception, see below) in the sprawling final movement. It would be difficult to imagine the dirge-like chorale or the tuba solo in the opening played with more color or precision. The buildup to the  massive C major/C minor climax was extremely effective in its patience and deliberateness.

In a performance that reveled in extremes, the hammer blows (two in this performance), arguably the most dramatic gestures in the entire work, were curiously understated. The first hammer blow sounded soft and muffled, while the second was almost drowned out by the tam-tam.

Hammer blows aside, this was a visceral and powerful performance that celebrated the glorious extremes of Mahler.