For the composer Craig Shepard, the music is in the street

Craig Shepard is the « maître d’œuvre » for two events that are part of the Festival d’Automne : ‘ON FOOT: Aubervilliers’, 24 daily silent walks in the city’, and ‘TRUMPET CITY: Aubervilliers’, a show played by dozens of trumpeters aligned in the street. 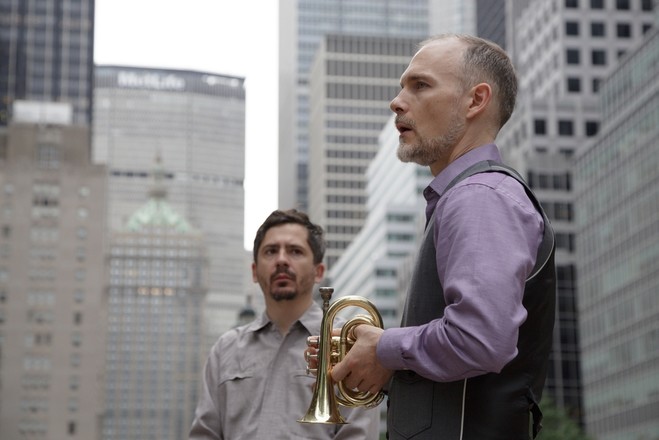 ResMusica : You are a composer and a trombonist. Could you explain in a few words where you set yourself among the world of contemporary music? Does being American holds a crucial importance for you as a musician?

Craig Shepard : I first heard of John Cage through a fellow student at the high school (gymnasium), who had taken out a record from the local library. For my 18th birthday, my brother Mark gave me a CD of the trombone music of John Cage. At university, I studied with Michael Pisaro who introduced me to Antoine Beuger, Jürg Frey, Manfred Werder, Thomas Stiegler and the Wandelweiser group. I also studied Renaissance sacred music with Ulrich Eichenberger in Zürich.

What is important about growing up in the American education system are two things : 1) the idea high art is for everyone, and 2) that if you work hard, you can find your own voice. I worked on a farm as a youth, but because my home town had good librarians, I was introduced to Cage’s music young. Because our town believed in high quality music education for everyone, I developed in a setting with very talented musicians. We played Stravinsky in marching band for football games ! And I heard the high school brass quintet play Bach’s Contrapunctus I in the cafeteria.

RM : You are the « maître d’œuvre » for two events that are part of the Festival d’Automne (‘ON FOOT: Aubervilliers’, 24 daily silent walks in the city’, and ‘TRUMPET CITY: Aubervilliers’, a show played by dozens of trumpeters aligned in the street). As silence is an important part of your music writing, do you consider these two events as a single one? Would you say that music comes from silence and/or comes back to it?

CS : They are different projects that came from playing outside. In 2005, I did ON FOOT : SWITZERLAND where I walked every day for 31 days, wrote a piece, and played it on trumpet outdoors. Walking is very supportive for me creatively. So when I thought about what to do next, I thought, « why not more trumpets ? » That led to Trumpet City in 2009.

Silence is a big topic. Briefly, I think of silence as « stillness of the mind ». This comes from experiences with retreats at Trappist monasteries and interest in Quaker practices. When walking together is silence, we become more open to this stillness. And when performing on the street, the attention of listening can lead to stillness—if the listener is ready for it.

« I view music as a spiritual practice. »

RM : On Monday 9th of September, you’ve gathered the trumpeters to tell them more about the performance of October 6th and do some tests. This first meeting focused on the attention we pay to our own body : to our feet, our breathing and the way we listen to what surrounds us. Would you say that music is an inseparable part of life, and that it’s more an activity than an object?

CS : , both from the performing and the listening side. This practice can be refined, expanded, and deepened. As music is in every culture known to anthropology (and in humpback whales!), I think it’s difficult to argue it’s separate from the human experience.

RM : TRUMPET City : Aubervilliers will be the 7th edition of Trumpet City. Did each new event provide you with surprises? Are you waiting for things you’ve not experienced yet? Do French people seem responsive to this kind of musical production?

CS : Christian Kobi presented the second performance in Berne, Switzerland on the banks of the River Aar. There it became very clear that the piece provides a frame through which passersby may listen to the city. And it’s the specifics of that location which are interesting in different performances. Part of this to be sure, is the musicians. Equally important are the listeners. That moment of engagement is where the piece really comes alive.

Given that 41 trumpets showed up at the performance, I suspect yes ! When we took twelve of them out on the street at 21h to test the acoustics, we were all surprised by the enthusiastic engagement of those on the street. I am very curious how this one comes out.