This « Chopin » proves overall to be overwhelming, amazing, even insolent, insofar as it has everything possible in it, allowing us to learn all about the man, his time, and his work. 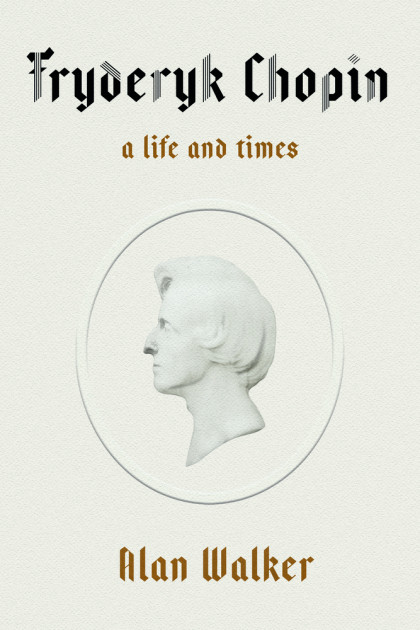 It would be useless for us to revisit here the thousand and one details of Frederic Chopin’s life in this minutely researched conclusive biography by Alan Walker, who has proven himself to be a master of the form in his Franz Liszt, which has been lavished with awards and other recognition (French translation by Fayard). We’ve no need to redo what Walker has so masterfully done for us.

There is the family, of course: Nicholas (Mikola) Tekla Justyna, Ludwika, Izabella, Emilia and the others… There are the childhood friends (Dziewanowski, nicknamed  » Domuś « ), the regular Chopin (Linde) family guests, the schoolmates (Fontana et Matuszyński), the professors (Elsner), large numbers of them, with whom Chopin will remain connected throughout his life. Later on, there is the future Dr. Malfati, who had at various times treated Beethoven and the cellist Auguste Franchomme… The first improvisations and compositions, for which he drew inspiration from the works of (to cite only two names) Mozart (whose « intimacy », George Sand reminds us, he adored), and Boieldieu. The first recitals: in the salons of the Polish aristocracy, among the great families of Warsaw, at the home of the Romanovs. That is how he creates for himself « a persona », « a character », « courteous », « civilized », « aristocratic…. « . One day, Berlioz reproached him for playing only for princes, ministers, and ambassadors. But Chopin was shy and detested huge concert halls and their « immense public ».

As for his health: A frail and delicate build, the first signs of a « galloping tuberculosis » the « treatment » : two glasses of mineral water daily, Bad Reinerz (summer, 1826..) Later, Custine and Moscheles, then Sand, are worried. Chopin eventually goes to consult Mademoiselle Lenormand, a clairvoyant and fortune-teller, who numbers among her clients Tsar Alexander I, the Duke of Wellington, and Marie d’Agoult. His tastes are especially strong for the music of J. S. Bach and for opera. He has little appreciation for the « empty virtuosity » of Liszt. He goes to hear Sontag, Catalani, Pauline Viardot, Pasta (in Medea). He is lionized, celebrated, from Vienna to Manchester, even adored. Kreutzer, Czerny, Hiller (who calls Chopin the « Raphaël of the piano ») all come to hear him. But he’s always too shy to go and speak to them. In London, he’s very impressed by the horses, the women, and the palaces. Chopin is a man of habit. All change upsets and disorients him. At the end of his life, despite being terribly weakened, he still attends recitals, concerts, the balls at the Hotel Lambert, the theater (to see Marie Dorval).

The sudden love affairs. the caprices, his passion for Konstancja Gładkowsk and Maria Wodzińska, but perhaps also for Delfina Potocka. During the summer of 1830, he travels 300 kilometers to go and hear Konstancja Gładkowska, to whom he is attracted. And then of course, there was George Sand, whom he meets in 1836 at one of those soirées that he likes so much, this one organized by Marie d’Agoult and attended by Heine, Delacroix, Hugo, Balzac.

For more than ten years, Chopin receives from George Sand all the attention he asks of her, Mallorca: this chapter devoted to their stay on the island (pp. 372-398) represents, even on its own, a veritable anthological piece. Walker’s style becomes somewhat spicier. Unforeseen events and misadventures occur more frequently, and are dealt with, from one page to another (the arrival of the upright piano [the settling-in at Valdemosa, the awful weather, the return voyage). For the months before death, Walker deals with everything, including the financial problems, the heated arguments, the undefinable Solange, the assistance given to them by Jane Stirling and her sister, Katherine Erskine, a final trip to London, where he meets, among others, Dickens, Thackeray, Emerson, Hallé… He consults Sir James Clark, Queen Victoria’s physician. The confusion and chaotic scenes of the final moments. Chopin dies on October 17, 1849, at the age of 39.

A Life…and Times… : Walker devotes a short chapter of 32 pages to the « Events » of Warsaw (1830-31), mentions a Benefit concert for the Polish exiles in London, some « incidents » linked to the time frame. Not a very extensive description… And then, how does one deal with the thousand and one « notes » of this biography ? They first appear on p. 4, interrupt, encumber, are excessive in a narrative otherwise flowing and accessible. They are also, quite often superfluous and secondary… Let’s admit though that Walker gets back on track here and there. He corrects, revises, rectifies, refers back to certain details in earlier biographies. And we learn that Maurois and Louise Vincent belong to ancient history. As for the œuvre, it’s a delight. Walker proceeds to analyze with acuity, discernment, and perspicacity, the Nocturnes, Mazurkas, Ballades, Polonaises, Préludes, and Waltzes. He unhusks, peels away, not to say « dissects » a body of work that he knows well, right down to his fingertips.