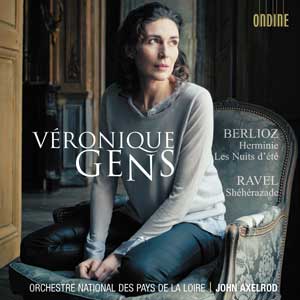 Those scores have a mesmerizing beauty but demand a very high technical and musical level. Hence, their discography is quantitatively massive but qualitatively very (very) poor. The tone of the solists cannot always seduce the listener into forgetting clumsy diction, misreading of the text or ignorance of the stylistic rules of prosody. In this context, the legendary version of Crespin and Ansermet (Decca) of Les Nuits d’été and Shéhérazade is still considered the best, decades after its recording. Admittedly, we can also find some partial hits : Susan Graham (Sony) in Berlioz and Ravel or Anne Sofie von Otter with Boulez (DGG) in Ravel. But there are also numerous disasters, as Kiri Te Kanawa with Barenboim (DGG) in Berlioz or Sylvia McNair with Ozawa in Ravel (Philips).

Véronique Gens is familiar with the tragic and the secrets of these scores, as she had already recorded with Louis Langrée a a very beautiful version of Les Nuits d’été (Virgin).

The singer doesn’t possess per se the most phonogenic or sensual tone, but her musical intelligence, her perfect diction and her feeling of the text convey their poetic emotion. Effects are under control with almost introspective restraint, a little dry, but that is a key to overcome the difficulties of this false and naive simplicity, while still preserving the emotion of the language.

John Axelrod imposes a light, transparent accompaniment, which is energetic but never brutal. He turns out to be in perfect harmony with the singing’s expressiveness. The American conductor brings together the sense of colors, mastering of the structure and familiarity with the style. In this way, his Berlioz sounds «modern» and spirited, and his Ravel brings us into an oriental-ish dream land, without turning it into Technicolor. The performance of the Orchestre National des Pays de la Loire is remarkable, its winds being very sharp and their tone sounding very «French».

The album altogether provides a musical obviousness which make it a new reference. We are also delighted to witness a French orchestra honoring with that much skill its musical family tree.