Mariss Jansons makes the Turangalîla-Symphonie his own 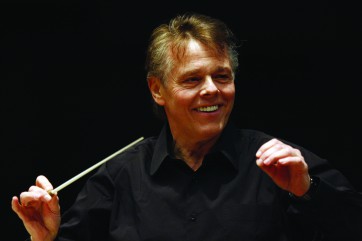 If there was ever a concert distinguished by the originality of its program and the quality of its interpreters, it was surely this one. It featured the vast, if not overwhelming, Olivier Messiaen’s symphony played by a Bavarian orchestra with Wagnerian sonorities rather than the typically French style of the composer, under the baton of a first-class conductor whose vision of Messiaen’s work could only sharpen music lovers’ curiosity.

Right from the Introduction we got an idea of the style that conductor Mariss Jansons and his orchestra would give to this work, half symphony and half double concerto, in which the piano and the ondes Martenot function almost as soloists. As a matter of fact, on stage, they were placed on the spot normally reserved for the soloist. The density and tension with which the conductor imbued the phrasing, as well as the depth of orchestral sound – based on an amazing brass section– were signs that the Bavarians were not going to go against the nature of the score, and that the conductor would sculpt a tension-climax-release pattern placing Messiaen in the direct lineage of the great classicists.
It is easy to imagine that, when Leonard Bernstein conducted the piece at its premiere in Boston, he emphasized the subtle swing that can be found in the most exuberant parts of the work, whereas its absence here gave an even more classical and timeless feel to Mariss Jansons’s interpretation. But the conductor otherwise succeeded in giving the ten parts of this symphony a strong consistency – under other batons, the sections can appear disparate – without introducing any monotony – no mean feat. Jansons complied with the composer’s markings – which ask most of the time for a moderate tempo (modéré) or even very moderate (bien modéré) – and he did not try to step up the pace, in order to avoid the aforementioned monotony. The induced contrast with the faster movements was perfect, and the intrinsic animation of each movement was particularly polished.

All of this gave birth to a rather impressive, rigorous, perhaps even rigid, interpretation, the orchestra being held with an iron grip. The instrumental level was very high; maybe only the woodwinds – a typical strength of French orchestras – were lacking just a tad in idiomatic quality (the bassoon especially) though not in virtuosity or commitment. The strings, and even more the brass, were amazing to the point of having us regret that Messiaen did not use the Wagnerian tuba in his rich orchestration, since it would have shown the Bavarian instrumentalists to even better advantage. For those who had never heard the piece before – most likely many in the audience– this German-strong interpretation was probably more accessible. It was indeed very well received by the audience at the Théâtre des Champs-Elysées. But was the music gained in drama, coherence, obviousness and plushness of sound, it may have lost in “Messiaen-ness” of character. Thus, being focused on the transcendence of love – as it happens, specifically on the one who unites Tristan and Yseult, “reflection of the only authentic love : divine love” – the piece was in the end not that divine. Indeed, ecstasy was there (in the last movements) but it was much more orgasmic than ecstatic per se.
Maybe some will have felt that Jansons’s was something of a misinterpretation of the score, but we can only acknowledge that the performers championed this vision with conviction and panache, together with a quite unsurpassable level of execution.

Jean-Yves Thibaudet, who knows the work perfectly well from having previously recorded it, was very convincing, in his solos in particular. He may have been sometimes a little short of power and overshadowed by the orchestra, but this was nothing compared to the ondist Cynthia Millar, who was way too discrete, and whose performance was the only real problem of this concert. Admittedly, she may have undermined by the instrument’s speakers placed at ground level on the front of the stage, which made hard for the the sound to reach the upper levels of the hall, including the first balcony, usually a great spot in terms of acoustics. This may be addressed by the broadcast of the concert, which was recorded by France Musique.