ICMA 2013 : a trophy for Vladimir Fedoseyev

In the category Historical Recordings, Russian label Melodiya won an Award for the box ‘Les Ballets Russes’ (catalogue No. 1001990) with Igor Stravinsky’s The Firebird, Petrushka and The Rite of Spring, played by Moscow Philharmonic, Moscow State Conservatory Symphony Orchestra, Radio and Television Symphony Orchestra under conductors Dmitrij Kitajenko, Pierre Boulez and Vladimir Fedoseyev. While at the Award Ceremony in Milan (18 March 2013), Dimitrij Kitajenko was given a trophy, Vladimir Fedoseyev received his trophy at the beginning of a concert with the Tchaikovsky Symphony Orchestra on 10 April at the Grand Hall of Moscow Conservatory. The trophy was presented by Andrey Krichevskiy, CEO of  Melodiya. 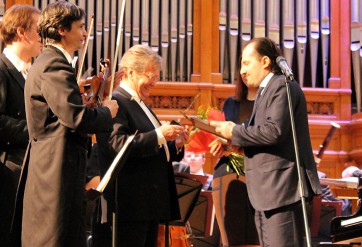