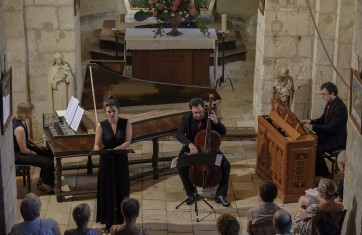 You are fond of baroque music and dream of smelling the fresh scent of green grass out in countryside? If so, the Festival Itinéraire (the Itinerary Festival) in the green Périgord is made for you. Thanks to the initiative of organist and conductor Ton Koopman, the festival offers an array of baroque repertory over the course of a long weekend, including both well-known and less well known works, in local churches big and small.

The program this year included works by Bach, Vivaldi, Telemann, Handel, Frescobaldi, Buxtehude, Marais, and so on, but also Giovanni Paolo Cima (ca. 1570–1622), Constanzo Festa (ca. 1485–1545), Hermann Hollanders (ca. 1595–ca. 1640) and many others. In between the opening concert on Thursday, July 15, with the theme of Virtuosity and Sentiments, by the ensemble La Rizonanza in the abbey of Brantôme, and the closing concert, entitled From Spring to Dusk, on Sunday, July 28, in the church of Saint-Astier, you could follow two different, and intensely involving, tracks through the festival’s offerings.

On Friday, July 26, there were four concerts and two conferences (on architecture and theorbos) at the Café Baroque (a few stands set up for the day in front of the abbey church of Saint-Cybard-de-Cercles), where encounters among festivalgoers, musicians, and organizers occur naturally around wines and other local products.

The climax of the festival came on Saturday, July 27, with six concerts of half an hour each in six different churches, a circuit extending some 50 kilometers (31 miles) in total. First, there was a welcoming concert at the early hour of 9:45 a.m. in the church of Saint-Privat-des-Prés, at which Koopman performed on the organ works by, among others, Sweelinck, Frescobaldi, and Buxtehude. Then the audience, divided into five groups, headed out for the rest of the staggered series of concerts. 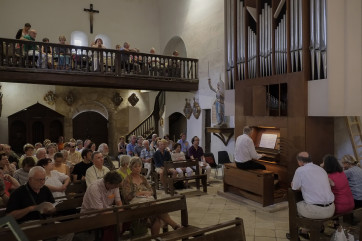 Our journey began at the church of Saint-André-de-Double, a great part of which was built in the fourteenth century in the Romanesque style. Mezzo Anna Zander celebrated life, love, and nature in an recital of Italian music (Caccini, De Rore, Frescobaldi, Kapsberger, et al), including Caccini’s famous “Amarilli, mia bella.” In the seventeenth-century church of Saint-Sulpice-de-Roumagnac, organist Jan Kleinbussink played works by J. S. Bach and his disciples Johann Ludwig Krebs (1713–1780) and Gottfried August Homilius (1714–85). The Flemish organ, which was donated by a patron in 1968, is too big for a church of this size, but that does not at all prevent music lovers from appreciating its solemn tones. Next, in the church at Faye built in the twelfth century, we continued with Bach, but this time, his descendants were highlighted: Carl Philipp Emanuel, Johann Ernst, and Wilhelm Friedemann, and so on. (The pieces played are not all of reliable attribution.) Oboist Antoine Torunczik and bassoonist Xavier Zafra, who comprise L’Academia dei Dissionanti together with harpsichordist Chiapoin Kuo, proved their great virtuosity on this occasion.

The fourth concert of the itinerary took place in the church of Saint-Jean-Baptiste-de-Combéranche, which is the church of a former commandery of the Knights of Malta, built in the thirteenth century. Here, the three musicians of the Fantasticus ensemble offered three trios, by Leclair, Rameau, and Marais. Finally, at 5:30 p.m., the series of concerts ended with the Cyclopes ensemble playing some of Handel’s virtuosic Italian music in the church of Notre-Dame-de-Bourg-du-Bost (construction of which began in the Romanesque was developed mainly in the twelfth and sixteenth centuries).

If the charm of the music for small ensembles that we heard was irresistible within these ancient walls—each of the venues can welcome at most a hundred people— it is still to be regretted that the spaces were too restricted compared to the volume produced by some of the soloists (or that, in some cases, that the spaces were too big). But the pleasure of this festival lies above all in the association of Baroque music with nature and the discovery of these places—an effect that was perfectly successful.