Although the major part of the seaon of fetivals is over by September, one should not overlook the very last ones. Indeed, those tend to offer seductive projects and programs, this is certainly the case for the Zermatt festival.

The Zermatt Festival and its academy (summer school) are held in the famous Swiss ski resort of the same name in the Alps, partly at the instigation of the resident Scharoun Ensemble (who won an International Classical Music Award in 2012 in the chamber music category), which was founded by and is still made up of soloists from the Berlin Philharmonic.

Founded in 1983, the Scharoun enjoys collaborating with young musicians (who are called “academicians”), as they do every summer in Zermatt for two weeks. The idea is to help the younger players develop, more through collegial advice than any conventional master-student relationship. The program is extremely intense, and dozens of works are performed by the Academy’s orchestra and by chamber music groups (including some members of the Scharoun). Some of the concerts are reserved for the academicians.

The evening concerts are proof that the Scharoun Ensemble seeks to encourage as much artistic flexibility as they can in the bright young things, promoting concepts that lead them off the beaten track by mixing the symphonic and chamber music repertoires and by breaking down the barriers between musical eras. The concerts, taking place in the beautiful St. Mauritius-Pfarrkirche church, witnessed admirable performances.

The soprano Mojca Erdmann, very popular in the greatest concert halls worldwide, performed some of Mozart’s and Mendelssohn’s concert arias, an area in which she excels, thanks to her technical reliability (especially in high notes) and her crystalline tone. “Vorrei spiegarvi O Dio” and “Ah, lo previdi” were delightful to hear, and it was very nice to rediscover Mendelssohn’s too-seldom-performed “Infelice ! Gia dal mio sguardo si dilegno !” Erdmann then leaped forward in time to perform, together with clarinettist Alexander Bader, contemporary composer Wolfgang Rïhm’s mysterious “Mnemosyne.”

One of the winners of the Best Chamber Music ICMA 2013 award, cellist Nicolas Altstaedt is a fantastic musician. Thanks to his charisma and his always on-target musical ideas, he enjoys unanimous acclaim. Haydn’s Cello Concerto no. 1 has seldom been heard played as such a jubilant swirl, animated with profoundly youthful energy, far from the image of Haydn stuck in rigid, dusty classicism. The harmony of soloist and orchestra, which played without conductor, led only by the Scharoun’s section leaders was a model of style and musicality. The finale was exuberant and frenzied.

Altstaedt returned along with his colleagues for a weightless performance of Schubert’s famous Quintet in C Major. With violonist Wolfram Brandl as leader, the artists achieved absolute musical perfection—definitely one of the festival’s highlights. On the following day, another group, including the musicians who had played the quintet, tackled Mendelssohn’s Octet. Although nothing to be ashamed of, this performance was less successful and did not reach as the heights of the day before. As far as winds were concerned, Mozart’s Serenade no. 12 was sublime, thanks to the seemingly infinite range of dynamics of the leading players, clarinettist Alexander Bader and oboist Jonathan Kelly. 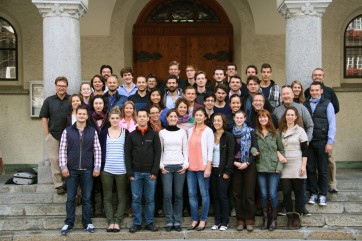 The last concert of the festival, in the majestic Riffelalp chapel, located than 2000 meters above sea level and accessible by funicular, is traditionally reserved for the academicians. The eclectic program was diverse, having been prepared by musicians from the Scharoun Ensemble. It put the cohesion and technical precision of the young artists severely to the test. In this kind of event, there are always ups and downs, even if the overall artistic level remains very high. Some performances particularly deserve to be praised: the duet of violonist Johannes Strake and cellist Johannes König in an overwhelmingly dense performance of Kodaly’s Duo for Violin and Cello, or the little pieces for four horns by a trio of great Polish hornists (Maciej Baranowski, Grzgorz Curyla, and Aleksander Pokrywka) along with Stefan de Leval Jezierski, one of the hornists of the Berlin Philharmonic.

In 2014, the festival will celebrate its ten-year anniversary. This milestone is an important one in the history of a young festival, anticipated by the festival’s organizers (including Giovanna Panese) with serene confidence . There may be many festivals, but Zermatt is unquestionably among the best in Europe.

Although the major part of the seaon of fetivals is over by September, one should not overlook the very last ones. Indeed, those tend to offer seductive projects and programs, this is certainly the case for the Zermatt festival.