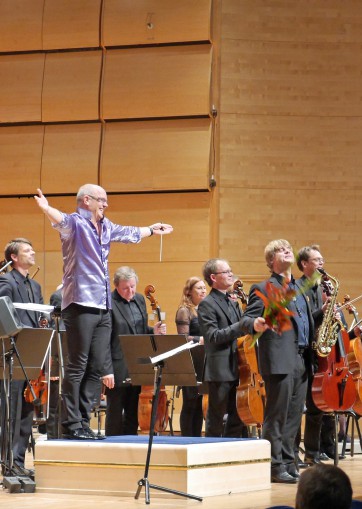 The Norrköping Symphony Orchestra has a long history of performing and recording the still relatively unknown Swedish composer, Allan Pettersson (1911-80). This began in the late 1970s with Okko Kamu’s blistering rendition of the Symphony No. 6, followed by a series of BIS recordings with Leif Segerstam in the 1990s, and continuing now with the ever-energetic Christian Lindberg. In this concert Lindberg conducted both the Symphony No. 16 and 4, as part of the orchestra’s goal to record the complete symphonies of Pettersson for BIS. It is likely that no one in the past has attempted two Pettersson symphonies in one program, and it is unlikely that this will ever happen again.

The centerpiece of the evening was the Symphony No. 4, generally considered to be the final work of Pettersson’s early orchestral style. On the surface, the symphony seems to be a rather jarring combination of the tonal and non-tonal, of peace and extreme conflict. Pettersson does try to generate a unified whole with these extremes, and careful listening reveals this. Of particular note are the prolonged stretches of hymn-like simplicity, an apparent tribute to the composer’s mother. As expected with Pettersson, there is some very violent music (especially the central climax with 9 percussionists). However, the massive, cataclysmic chord heard shortly before the work’s conclusion is shocking even by this composer’s standards.

Compared to Pettersson’s other symphonies, the Symphony No. 16 could be considered an unusual, if not problematic piece. Essentially a concerto for alto saxophone and orchestra, the nature of work is consistent with Pettersson’s late style, which often consists of dense orchestral textures and vigorous contrapuntal writing. Not surprisingly, the risk of drowning out the soloist under these circumstances is significant. Furthermore, this work is rather elusive emotionally and musically, which generally is not the case with Pettersson.

Nevertheless, the soloist Jörgen Pettersson played this music as if he was born for it, being in complete control not only of the technical demands, but also observing quite literally the composer’s numerous expressive and dynamic instructions. While the work remains elusive, this performance made a convincing argument for the piece, and the upcoming recording will likely provide further elucidation.

In between these two works was Kundraan and the Arctic Light, written by Christian Lindberg. The piece served as a vehicle to display Lindberg’s incredible talents as trombonist, conductor, composer, and in this case, storyteller and speaker as well. Lindberg’s compositional style is well suited for the story he is trying to convey; each episode of Kundraan’s adventure was clearly illustrated and easy to visualize.

Pettersson’s music is pretty much the opposite of music that “plays itself” and it requires complete commitment from conductor, orchestra, and audience as well. Lindberg clearly knows what he wants to do with this music and his confident control over these complex scores is testament to this. Special mention of course goes to the Norrköping SO, who truly did themselves proud (apparently they only had three rehearsals to learn three new pieces).

Although the Norrköping SO lives in the shadows of its more famous Swedish counterparts, the orchestra continues to distinguish itself as a staunch proponent of Pettersson. A message to the orchestras of Gothenburg and Stockholm: this is your national composer, take note of what is happening in Norrköping.