Allan Pettersson by Lindberg, a historic milestone like Mahler by Bernstein ?

In his defense of the music by Allan Pettersson, Christian Lindberg dares comparing his project with what Leonard Bernstein did in the 1960’s to get Gustav Mahler recognised among the greatest composers. It is true that the situation has similarities between what Bernstein achieved with the New York Philharmonic and what Lindberg does today, with an ambitious program of recordings with the Norrköping Symphony Orchestra. The goal is clear : make Pettersson join Mahler, Shostakovich and the Scandinavian Nielsen and Sibelius among the most respected composers of symphonies.

In his famous television series Young People’s concert, Leonard Bernstein devoted one show in 1960 to the Austrian composer with this revealing title « Who is Gustav Mahler? ». Speaking to his young audience that filled the Carnegie Hall, Bernstein asks: « Has any one of you ever heard of him? I’ll bet not, or only very few of you. » Mahler was played – more than Pettersson today – but he was still considered composing a conductor’s music. Bernstein recorded the complete symphonies with the New York Philharmonic, thus initiating the real recognition of Mahler.

Bernstein had a strong personal affinity with Mahler, very much like Lindberg with Pettersson – and Lindberg is close to Pettersson like no other Swedish musician before. Similar to Bernstein, Lindberg has an extraordinary energy and is equally comfortable as a performer, conductor and composer, and he uses all modern means of communication at his disposal. Leonard Bernstein was on television, Lindberg leverages the Internet and social networks, where he published his contributions and post videos. All of that is required to overcome the major obstacles to the recognition of Pettersson.

Lindberg’s cooperation with the Norrköping Symphony Orchestra was received with a strong international acclaim (including a ResMusica Clef d’Or 2011 for the world premiere of the Symphony No.1) but Pettersson music remains underestimated. So Christian Lindberg and the orchestra embarks on a five years project with seven symphonies to be recorded, a project which will culminate in a European tour with the least unknown symphony, the magnificent Symphony No.7.

Thus, during the next four autumns, Lindberg and Norrköping will perform Pettersson works : in 2014 they will play the huge Symphony No. 13, which is one of the composer’s monuments, followed in 2015 by Symphony No. 12 – another large work with chorus and very socially committed towards the poor working classes. In 2016 it will be the turn of the Symphony No. 14, an opportunity to experience that the late Pettersson is still eruptive, and 2017 will be a triumphal conclusion with Symphony No. 7. Each symphony will be recorded at the beginning of each year, which will be released by Bis. The next recording session will be with Symphonies No. 4 and 16, performed in October.

No one can say if at the end of this sustained effort, the recognition of Pettersson’s music will have been advanced as Mahler’s with Bernstein, but it can be argued that all conditions are met: a highly motivated conductor, a label – Bis – whose quest for quality is unquestionable, and maybe most importantly an orchestra willing to play this music year after year.

For there is no doubt that the main challenge for Pettersson’s reputation to go beyond the boundaries of Northern Europe is the musicians themselves. The problem is not conductors – from Dorati to Lindberg and including Sergiu Comissiona and others there was never a real shortage of conductors- nor the audience – any enthusiast of Mahler, Sibelius and Shostakovich can enjoy Pettersson. The problem is the orchestra musicians who hate this music for its extraordinary technical demand. When musicians have the misfortune to meet one of the few conductors in the world who wants to perform it, they refuse to play it, and this is particularly true of major Swedish orchestras. 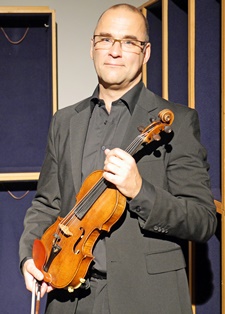 Jon Henrik Petersen, concertmaster of the Norrköping orchestra, told us: the most difficult music of Richard Strauss seems easy compared to that of Pettersson. And the Symphony No. 9, given in concert in October 2013 and to be released in SACD this fall, is the most difficult work he has ever played: it is necessary to rehearse it at home but after an hour of practice the music leaves you completely drained. This is a music which speaks to you, that comes into you. At the same time it is monotonous, it continues and never seems to stop. And when it stops, it is as if you come back to life. Christian Lindberg and the other conductors and musicians who plays this music have a very much similar experience.

Asked whether this music sounds typically Scandinavian, with its lyrical islands as a piece of blue sky through the clouds, and a certain influence of Protestant religious music? Jon Henrik Petersen does not believe Swedes recognize themselves in the pain expressed by the music, perhaps because the Scandinavians have not experienced world wars on their territory.

Would the Swedes be uncomfortable with the violent feelings Pettersson expressed openly, which they would prefer to keep to themselves? This question is very difficult, recognised the concertmaster. He mentions his own father, a musician himself, who was blown away by the music when he heard it, and found that this music was a fantastic experience.

The confidence Norrköping orchestra puts in Christian Lindberg and Jon Henrik Petersen helps it to become gradually familiar with the music. With the ambitious Allan Pettersson project until 2018, the musicians realize that they are actually making history for themselves, for their orchestra, for Swedish music and more broadly for orchestral music.

Those who did not have the historic opportunity to attend symphonies of Mahler by Leonard Bernstein in New York in the 1960’s, they have an opportunity to catch up by going to Norrköping all next falls and listen to Lindberg performing Pettersson. It is still time to be among the pioneers, and be among the “happy few” who will be able to say : « I was there! « .

More information on the Allan Pettersson Project on Facebook

In his defense of the music by Allan Pettersson, Christian Lindberg dares comparing his project with what Leonard Bernstein did in the 1960’s to get Gustav Mahler recognised among the greatest composers. It is true that the situation has similarities between what Bernstein achieved with the New York Philharmonic and what Lindberg does today, with an ambitious program of recordings with the Norrköping Symphony Orchestra. The goal is clear : make Pettersson join Mahler, Shostakovich and the Scandinavian Nielsen and Sibelius among the most respected composers of symphonies.