Lindberg sets a new reference for Pettersson’s Symphonies No. 4 and 16 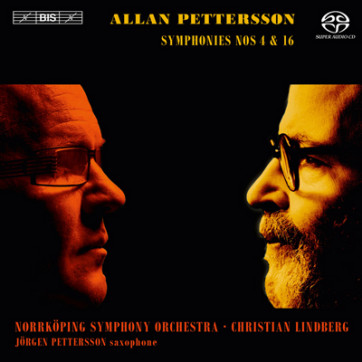 Every release of Pettersson music under Christian Lindberg’s guidance has set the new reference for each work in question.

The Swedish composer Allan Pettersson wrote possibly the most physically, emotionally, and intellectually demanding symphonic music in the entire orchestral canon. While largely considered Sweden’s most important symphonic composer, his music continues to struggle for wider recognition. In the early 1990s, the Finnish conductor/composer Leif Segerstam began a very promising symphony cycle with the Norrköping Symphony Orchestra, but left the project incomplete for undisclosed reasons. Since 2011, the trombonist/conductor Christian Lindberg has picked up where Segerstam left off, and every release under his guidance has set the new reference for each work in question. The present album features the Symphonies No. 4 and 16, works which are considered obscure even by the composer’s enthusiasts. It has been recorded a few months after it was performed live in Norrköping.

The Symphony No. 4 can be considered a transitional work between Pettersson’s early and middle styles. In this work, Pettersson begins to move away from the episodic, nervous energy of the Symphony No. 3 to a broader and more cohesive approach. On the surface, the Symphony No. 4 is one of the composer’s most accessible symphonies, featuring lengthy episodes of tonal, chorale-like elements (often sullied with dissonance) which interact with more atonal passages. This clearly presented conflict between dissonance and consonance (typical of Pettersson) reaches climaxes of shattering intensity and violence.

Lindberg’s primary competition in this Symphony N° 4 comes from Alun Francis’ interpretation on CPO. Francis seems to place more emphasis on the work’s violence (perhaps by reinterpreting some of Pettersson’s dynamic instructions) and brings out a greater sense of desperation. However, Lindberg’s deeper focus on the big picture while emphasizing attention to ensemble and instrumental detail make this newcomer the recording of choice. For example, listen to the impossibly delicate playing at 17:23, or the clarity he brings to the percussion during the work’s main climax at 22:02.

In the 1970s the American saxophone virtuoso Frederick L. Hemke asked Pettersson if he would be willing to write something for the saxophone. Instead of receiving a reply, Hemke received a score of the Symphony No. 16. Although this work has been recorded twice before by committed interpreters (including Hemke himself), at least for me this work is a Pettersson curiosity and not much more, as I have struggled to understand it.

I had high expectations that Lindberg’s take on this piece would give me reason to reassess my opinion, and I have not been disappointed. As expected, Lindberg brings out orchestrational details obscured in previous interpretations. Listen to the chugging cellos and violas at the opening, the syncopated horns in the third section, and the excellent woodwind playing throughout.

Soloist Jörgen Pettersson really believes in this music, and his conviction to the cause is clearly present throughout. While he dispatches the rapid, virtuosic passages with apparent ease, it is his soulful and bittersweet tone which is particularly memorable during the work’s lyrical passages. It would be difficult to imagine anyone providing a more persuasive argument for this work to enter the saxophone repertoire.

Perhaps the most satisfying aspect of these interpretations is the utmost respect that the Norrköping SO and Lindberg give to this music. Through fanatical adherence to the scores and just pure hard work and commitment, this new recording (and the previous releases in Lindberg’s cycle as well) make, yet again, the strongest possible argument for Pettersson’s unsung greatness.

Similar to last year’s release of the Symphony No. 9, this new recording includes a bonus DVD featuring the documentary Vem fan är Allan Pettersson? (Who the Hell is Allan Pettersson?). Made in 1974, the documentary mostly consists of the camera focused on the composer, who speaks both hesitantly and excitedly about himself and his road to becoming a composer.