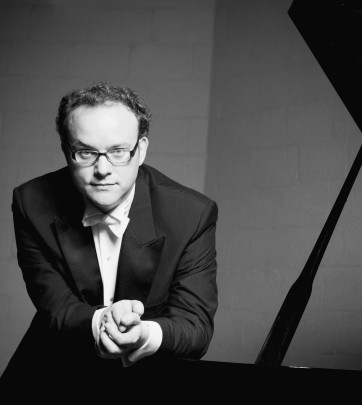 Magnus Lindberg’s tenure as composer-in-residence with the New York Philharmonic resulted in several new works, including his second piano concerto. Dedicated to Yefim Bronfman, the concerto was clearly conceived with Bronfman’s imposing virtuosity in mind. Similar to the other works from Lindberg’s New York tenure, the second piano concerto radiates with both exuberance and joy.

One of the more striking aspects of this concerto is the clear influence of Ravel’s Concerto for the left hand. From the bass-register dominated opening, to the harmonic and gestural similarities, one might think that Lindberg’s work would be the result if Ravel wrote a piano concerto today. Nevertheless, Lindberg’s trademark sound world is unmistakably present: swirling filigrees, parched woodwind fanfares, and massive brass chorales.

The soloist in this evening’s concert was Nicolas Hodges, making this the first performance of the work without Yefim Bronfman. Given the wide range of contemporary composers in Hodge’s repertoire, it came as no surprise that the enormous technical demands of this piece seemed almost insignificant to him. While Hodges might not have the same imposing presence as Bronfman, Hodges brought a degree of refinement and grace to Lindberg’s often percussive writing.

It goes without saying that the Finnish RSO and Saraste are thoroughly familiar with Lindberg’s style. Any performance of Lindberg’s music with these forces is always convincing, and this evening’s concert was no exception.

On the surface, pairing Lindberg’s Piano Concerto No. 2 with the Symphony No. 11 of Shostakovich might seem like an odd combination. However, one of the main motives in the piano concerto is a neighbor-note gesture of three pitches; this motive is also found throughout the symphony.

The Symphony No. 11 is Shostakovich’s most cinematic symphony, and is also one of the most difficult of his symphonies to perform convincingly. Much of this is due to the fact that very little (if any) evolution of Shostakovich’s material occurs throughout the work’s 60 minute duration; themes and gestures appear and reappear largely unchanged. This is further complicated by the challenge in finding the right balance between stasis and forward movement.

Saraste chose generally brisk tempos throughout. While this caused the static sections to seem less « frozen, » the Finnish RSO strings played with such tight ensemble and appropriately barren sound that the effect was nevertheless fully convincing. Saraste’s purposeful and determined reading also sustained the work’s latent tension and general sense of foreboding.

Unfortunately, the percussion were curiously reserved in the symphony’s two most dramatic moments: the « massacre » scene of the second movement, and the work’s defiant coda. Saraste is generally a conductor who avoids excessive bombast, but the visceral impact of these sections is dependent on the willingness to go over the top.