An Exciting Biography of Toscanini, by Harvey Sachs 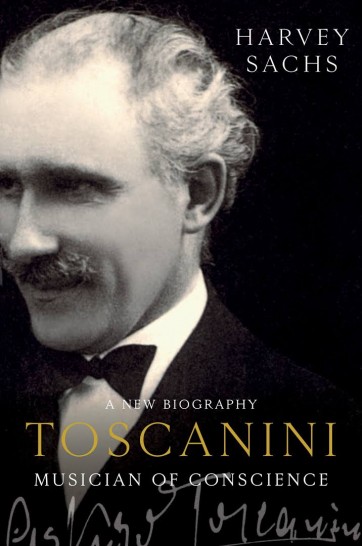 Toscanini : Musician of Conscience is a fascinating tome of 923 pages (in English) devoted to Toscanini. Fascinating, because it’s often brilliant and unquestionably deserves a place among the greatest biographies in the language.

Fascinating, not because it (sometimes) sets the record straight regarding certain  episodes in Arturo Toscanini’s life (not really necessary), but quite simply because Harvey Sachs, author of a Toscanini, published in 1978 and translated into French in 1980  (Van de Velde, out-of-print), returns to his subject and creates, seemingly out of nothing, or nearly so, an entirely new work. This Toscanini: Musician of Conscience is by no means an enhanced version of its predecessor (its title alone vouches for that). It’s new to us, bulging with its 1500 letters that came to light in the 90’s; its hundreds of recordings, made without the maestro’s knowledge and  released by Walfredo Toscanini, his grand-son, and Emmanuela Castelbarco, Wally’s daughter ; bulging with archives straight from La Scala, from the Met, the New York Philharmonic, fascist Italy, etc. Toscanini : Musician of Conscience, meaning courage, conviction, justice, and– why not say it,–faith ? In every respect—in himself and his family, his country, and his music.

With regard to himself and his family : Sachs describes him as modest, even austere, accessible, kind, and generous…That explains why he paid the hospital bills for members of his NBC Symphony ; why he refused to part with the musicians fired by staffing cuts in his orchestras;  why he refused, honestly and selflessly, honors, decorations, and other trinkets of our republics ; why he would come to the assistance of his compatriots who were victims of fascism ; why he would very often insult his orchestras (« You play like pigs ! ») only to excuse himself quickly with deference and humility ; why he expanded the number of benefit concerts and fundraisers, during and after World War I, then WW II , for the Red Cross, for Italian workers who had been expatriated, then repatriated in Italy between 1914-18, and for Pablo Cassals, banned from Franco’s Spain…

With regard to his family and children, Sachs describes him as attentive, considerate, never uncaring.  While Sachs remains discreet, he doesn’t in the least mininize the bawdy, misbehaving, lewd temperament of a…shall we say…womanizing… individual who also enjoys stirring things up (but is it truly to offend ?) Furthermore, all through his long career,he managed to impose certain ideas, some of which may seem ludicrous today : He insisted that all his musicians wear the same style of shoes (Turin, 1895) ; women were forbidden to wear hats during his concerts ; no encores were allowed (he refused to let Caruso perform one during the opening night of La Gioconda).

With regard to his adored country, Toscanini suffered from seeing it conquered, dominated, then invaded. Violently anti-fascist (his father had been one of the first to join Garibaldi’s camicie rosse [Red shirt brigade]); he refused to ever play the Giovinezza (Mussolini’s fascist anthem) before any of his concerts or opera performances and would not allow the Duce’s portrait to be hung in La Scala. In Bologna, he was attacked and badly beaten by Mussolini’s henchmen, following orders to teach him a lesson and keep him under surveillance.  He insisted that his name be the first on that impressive list of artists, signatories to a solemn letter addressed to the chancellor of the Reich, protesting the expulsion of Jewish singers and orchestral musicians from Germany. He protested vehemently to the fascist authorities, following the suicide of Giuseppe Gallignani.  While he was in exile in the United States, he refused to go back to Italy until the Republic had been proclaimed.

With regard to his music : If we are to believe Sachs, the maestrro is arrogant, bullying, sarcastic, destructive, hurtful, only to serve his music. He seems to have limitless energy and a stubborn streak to match. He frightens, horrifies, terrorizes Lotte Lehmann, and when Emma Eames learns that Toscanini has been  hired by the Met, she resigns immediately, completely distraught. Yes, he is ferocious, demanding, tyrannical. And yet, his integrity, his rigor, his « conscience » (an expression coined by Stravinsky )make his musicians adore and respect him. They excuse his outbursts and sarcasm, his tantrums and rash judgments. Stefan Zweig said, « His rehearsals are true lessons in morality. » Some of the maestro’s  whims remain uncontested, such as his interpretation of Schubert’s Fifth, with an orchestra reduced by one-half, or of Mozart played at top speed,  «  to teach Koussevitsky a lesson. » (He had little regard for the conductor.) But Sachs doesn’t comment on Toscanini’s often excessive and unashamed tempos (Schubert, Mozart, Sibelius…while his Parsifal still remains one of the slowest at  Bayreuth !) He simply refers us to the recordings, and to other videos of Tosca.

This enormous biography, uncompromising, complete, exhaustive (and seeking  its French translator), traces the entire artistic, personal, and political drama of Toscanini’s life.  It presents us with a veritable gigantic survey, which relates (and retraces and details), without any concessions and for our greatest satisfaction, the now completed chronical of Toscanini and his conscience.