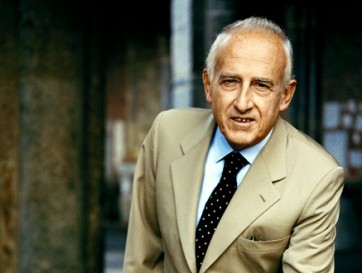 It was the last concert in the 2011-2013 Pollini Perspectives series, and the Maestro ended his Beethoven component with the last three sonatas (Pollini will record the complete cycle very soon with Deutsche Grammophon). He was also assisted by his son Daniele, who appeared as a soloist in the first part of the concert. In juxtaposition with the Beethoven works, music by Pollini’s fellow countryman and friend Salvatore Sciarrino was performed by the Neue Vocalisten Stuttgart and the Klangforum Wien under the baton of Tito Ceccherini. Those instrumentalists and singers are well versed in the composer’s stylized and concise musical language.

The twelve Madrigali Concertati – Carnaval – have been commissioned from Sciarrino by Pollini himself and were premiered at the Lucerne Festival. In the last three of the twelve – this was their French premiere – numerous references could be heard: Schumann for the title, but also Monteverdi for the genre. As a matter of fact, Sciarrino had planned to write a « second book » of those, albeit a capella; just as the Monteverdi himself did.

The no. 10, 11 and 12 make up a somewhat isolated triptych: the middle piece is solely instrumental, and the texts in the two other pieces are very spare, and are inspired by the aesthetics of ancient China. The singular profile of the Sciarrinian voice—that is, plaintive little glissando gestures that fluctuate in intensity and pitch—can be found. The musical writing is, as always, concertante, and possesses the same kind of concision. All this makes for a highly fragmented, enigmatic line, borderline silent. The ensemble is quite unusual (alto and soprano flutes, two cellos, two bass clarinets, two trombones) and allows for a marquetry of low tones, seasoned with the clear touch of percussion. This poetic universe, based on the idea of « focusing on the essential » can also be found in the instrumental piece (no. 11), even though the piano—an ethereal Daniele Pollini—is much more voluble there. This creates a more generous, but still transparent, musical substance. Tito Ceccherini, who was in command of exemplary musicians, conveys the atmosphere of this refined, intimate and ritualized music with precision.

In the second part of the concert, Maurizio Pollini was very impressive. He gathered Beethoven’s last three sonatas into a single interpretative impetus. In them, the composer, longing for liberty, explodes the traditional setting of the genre in favor of a more personal kind of dramaturgy, which follows paths previously unseen. Immediately, the feeling of urgency in the Maestro’s interpretation is captivating. He displays clearly the relief of the fragmented writing in the first movement of opus 109, and plays wonderfully with the contrasts in tone and in material. The Prestissimo in a minor starts with a furious gesture and grows from there. This darkens the musical landscape violently. The last movement, with variations, is not yet the « initiatory passing » of the last Sonata’s Arietta. For all that, Maurizio Pollini abandons any theatricality and seems to abolish time itself by immersing the audience in the music’s deepest level of harmonic motion and the score’s metamorphoses in tone.

Opus 110 ends with a fugue that act as a release of all tension, and is even bolder, intensifying the twists and turns of the dramatic path followed by the pianist in his performance, which took many risks. His technique in the very difficult first movement is not always flawless, but Pollini compels the listener to attend closely to the thread of Beethoven’s musical argument. After the sharp Allegro Molto, Pollini traces a bold trajectory in the Finale. He approaches the Arioso dolente from the perspective of tone and structure, and his Fugue, for all its objectivity, nonetheless contains unseen energy and a sovereign structure. Pollini’s rigorous and powerful performance is sustained by an emotional momentum as intense as it is contained.

Pollini remained at this very high level of performance in the Sonata, opus 111, finding balance despite the fact that this sonata includes only two movements. The authority of Pollini’s pianistic gesture rigorously governs his choice of tempi and the energy that infuses his sound in the Allegro con brio e appassionato. In the sublime Arietta, the emotion resided in the astonishing sounds that Pollini drew from the luminous ranges of his instrument: they were the result of the transformative process that he deployed throughout the variations. Having followed Pollini along this musical and spiritual path, we were left speechless.