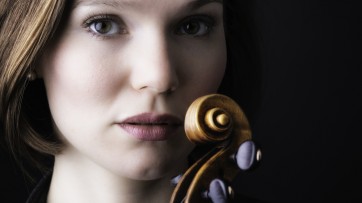 Tamsin Waley-Cohen was the only British nominee for 2016’s European Concert Hall Organisation’s (ECHO) Rising Stars recital tour, which coincide with her latest disc : a CD of violin concertos by John Adams and Roy Harris with the BBC Symphony Orchestra, and Andrew Litton. This is the first time the Harris piece has ever been recorded.

« In all the great venues that are part of ECHO, I will begin to build new audiences. »

ResMusica : You’ve been chosen as a Rising Star of the Town Hall Symphony Hall Birmingham (2016/2017). What changes have these honours brought you ?

Tamsin Waley-Cohen : Being a Rising Star has offered me incredible opportunities in a number of ways, and the two main ones are the following: I have had the honour of playing in the great halls of Europe,  in almost all of them I had never played before. This is a year of many debuts !

It also gave me the chance to commission a new work by a composer of my choice, and I was very lucky that the great Oliver Knussen agreed to accept this undertaking, and produced a beautiful piece called ‘Reflection’ which we have been able to share with all our audiences. It is his first piece in six years and it has been hugely exciting and informative to work with him.

RM : How is the ECHO Rising Stars program helping you with your career?

TW-C : I hope that by sharing my music and meeting so many new music lovers and audience members in all the great venues that are part of ECHO I will begin to build new audiences. As long as I am able to play the music I love with great musical partners in beautiful halls, I am happy – who could ask for more than that.

RM : How do you envision your European tour this season?


TW-C : I have already visited Brussels, Amsterdam, Luxembourg, Baden Baden, Vienna, Budapest, and Paris. In January, I performed at the new Elbphilharmonie in Hamburg. So far I have loved all the concerts and all the different elements the various halls bring out. I have learned something from every single one.

RM :  How did you discover the Roy Harris Concerto, which is part of your latest CD with the BBC Symphony Orchestra and Andrew Litton (coupled with the John Adams Concerto) ?

TW-C : Lyndon Jenkins, who for many years ran the Town Hall in Birmingham, mentioned the Harris concerto to me. Very sadly he has now passed away. He had a huge knowledge of the repertoire and of unjustly forgotten composers and their works. I found the score in the Washington Library. The work has never been played in the UK or Europe, but Harris is considered one of the great American symphonists of his generation.

RM : You have recorded many works of the 20th century, including rarities, such as Reynaldo Hahn Sonata. Where does this interest in unknown works come from ?


TW-C : I discovered the Hahn sonata through my interest in Proust. Although Hahn is not directly referenced in his book, he was a lifelong friend, also half- Jewish and an outsider, and introduced Proust to the Parisian music scene which plays such an important role in his life and work. I felt that Hahn’s music captured that perfumed fragrance of a moment in time and brought it to life in a new way for me.

RM : You have recorded many works of the 20th century, including rarities, such as the Reynaldo Hahn Sonata. Where does this interest for unknown works come from ?Have you actually had a chance to study his Concerto with John Adams himself ?


TW-C : No, I haven’t. When I asked him, he said  he prefers not to work with the musicians who are playing his works!   In fact, since he himself has already recorded this piece, it gave me more interpretative freedom to find my own way with this music. 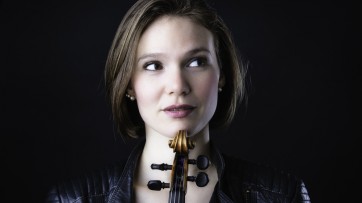 RM : Can you tell us about the program you perfomed at the Philharmonie de Paris on January (Beethoven Sonates, Ravel Ives, Szymanowski) and especially the French premiere of a new work by Olivier Knussen ?


TW-C : It has been a great honour to have a piece written for Huw and me by Oliver Knussen, and to have the chance to work with him, whose work I have admired for so long. It is the first work he has completed for 6 years and it a piece of great beauty, intimacy, and rhapsody. We have loved every performance of it.

The Ives is a very interesting work, a reconstruction of the early violin and piano sketched for the Holiday Symphony. Filled with black humour, this is Ives at his darkest, and absolute anti war piece.

The Beethoven ‘Spring’ sonata  needs little introduction, one of the best loved pieces of the repertoire, here we find Beethoven in a generally sunny and genial mood.

The Ravel is one of the great French sonatas of course, written after the war. The strangeness and discomfort of the first movement masked by an exquisite aching beauty. The famous Blues, inspired by the Jazz musicians who flooded Paris at this time, full of nostalgia, is followed by a dizzying Moto perpetuo, where the themes from the previous two movements are combined ingeniously.

The Szymanowski Nocturne and Tarantella is one of the most exotic pieces for violin and piano. A show piece for both instruments, the sensuous Nocturne leads to a truly wild dance to the death in the Tarantella.

RM : What are your plans and ambitions in terms of repertoire ?


TW-C : As a violinist, I am very lucky with repertoire. There is just so much great music, I could probably never play it all! However, I am always leaning and studying new pieces, not only concerti and sonata, but with my quartet The Albion as well. I love the flexibility of the instrument, that I can explore music from hundreds of years ago up to something written today. In the shorter term, my plans include beginning a Dvorak quartet cycle with the Albion quartet, a CPE Bach project with James Baillieu, and the premiere of a new concerto by Richard Blackford with the Czech Philharmonic.

« Together with  my sister, composer Freya Waley-Cohen, and architects Finbarr O’Dempsey and Andrew Skulina, we have been working on a fusion of music and architecture. »

RM : Can you tell us about your other activities, such as the Honeymead Festival and the Open Space residency at Aldeburgh ?


TW-C : The Honeymead festival is now in its 10th year, and it is a cross between a festival and a retreat really. It was borne out of the desire to work intensely and deeply on the great works of the chamber music repertoire without having to rush around or play a million pieces, like so often happens in festivals. We play one programme for the four concerts, so that we can really focus on those pieces. Each is on a different corner of Exmoor, and all the proceeds from the concerts go to local charities.

My open space residency at Aldeburgh comes to fruition this year as the piece will be finished and ready to be seen and heard for the first time during the festival. Together with  my sister, composer Freya Waley-Cohen, and architects Finbarr O’Dempsey and Andrew Skulina, we have been working on a fusion of music and architecture which presents the listening experience in a completely new way. The piece is called ‘Permutations’ and it consists of a piece for six solo violins, each housed in their own acoustically separate and malleable chambers. The whole architecture is made up of over 70 rotating doors, with different acoustic surfaces on each side. Is the listener stands in the middle, they can hear all the parts equally, and they are free to move around and manipulate the architecture as the wish, focusing on one or more parts, the possibilities are endless. They play the architecture as if it is an instrument and they are an integral part of the creative process.

RM : Do you have any models among older artists and how do you compare yourself to ?

TW-C : There are so many older artists I admire, from Kremer to Ma, Kreisler to Oistraikh and Richter. There are too many to list them all! But each one followed their own path and had their own unique voice, full of integrity.