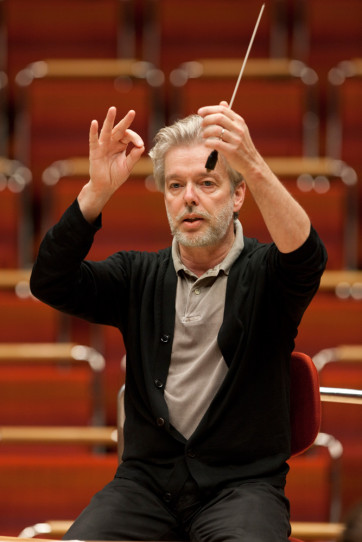 Jukka-Pekka Saraste is a familiar presence to Helsinki audiences, regularly conducting both the Helsinki Philharmonic and the Finnish Radio Symphony Orchestra. His interpretive style generally focuses on clarity, balance and transparency, while avoiding excesses such as bombast or effusive sentimentality. Such an approach led to mixed results in this program of Dutilleux, Strauss, and Brahms.

Saraste is almost solely responsible for the regular performances of Dutilleux’s orchestral music in Helsinki, and his recording of the French master’s orchestral works with the Toronto Symphony Orchestra provides further evidence for his affinity to the composer.

Mystère de l’instant is scored for string orchestra, percussion, and cimbalom and consists of 10 brief movements played without a break. As expected with the composer, the full range of colors and effects possible with this ensemble is exploited, while maintaining the composer’s trademark polished and transparent sound. Dutilleux includes a very important role for the cimbalom, sounding both integral and exotic in the work. The music shimmers, surges, and flickers. Busy pizzicato forests engage in dialogue with the cimbalom.

The string writing in this work is at times both highly intricate and quite treacherous, and the players occasionally had difficulties with music’s technical demands. Unfortunately, this detracted from the polished quality that is associated with the composer. The larger issue, however, is that the work seems to lack the same musical cohesion as for example Metaboles. Although others may rightly disagree with this assessment, in my opinion Mystère de l’instant feels more like a random collection of episodes with a somewhat arbitrary conclusion.

Strauss’ Vier letzte Lieder is one of the composer’s most beautiful works outside the opera house. Although this piece avoids the romantic excesses of Ein Heldenleben or Eine Alpensinfonie, a certain degree of warmth is generally required in any performance of Strauss’ music. Saraste’s interpretation featured brisk tempos and focused as usual on clarity, balance, and transparency of orchestral details.

Soprano soloist Juliane Banse is clearly passionate about this music, and her pure and refined tone were suitable to the tastefully restrained accompaniment that Saraste provided her. It is difficult to complain about this beautifully played and sung performance, but a little more warmth, especially in the strings, would have been welcome. Special mention goes to the heartbreakingly beautiful solos for horn (second movement, played by József Hárs) and violin (third movement, played by Jari Valo).

Brahm’s Symphony No. 4 and Saraste’s conducting aesthetic might just be a perfect match. This music is focused, rich in both harmonic and instrumental detail, and expresses its emotions eloquently and succinctly. Conducting without a score, Saraste’s first measures set the stage for a memorable performance: a beautifully shaped line from the violins, perfectly balanced with subtle woodwind calls and upward surges from the cellos. The rest of the work proceeded accordingly: an excellent performance of an orchestral standard.