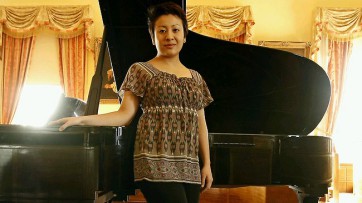 Ever since Sibelius, the music of Finnish composers has been a constant presence in orchestral concerts worldwide. Sibelius, Rautavaara, Lindberg, and Salonen are all acknowledged for their mastery of the orchestra, but relatively little attention is given the rich and varied output for piano that these composers also wrote.

In this program, the Australian pianist Aura Go continued her series of recitals focusing on the piano music of Rautavaara, while visiting the music of his compatriots as well.

Rautavaara’s Études were written in 1969, shortly before the composer moved towards a more tonal and romantic style. Each etude is based on an interval, with which Rautavaara develops his musical argument. Despite the title, this work is not simply a pedagogical exercise, but is satisfying on its own musical terms. For example, the etude focused on thirds features brilliant upward flourishes and rich lower register sonorities, while the fourth-based etude consists of rapid, rippling filigrees supporting a broad melodic line.

Rautavaara’s Seven Preludes dates from 1956 and is considerably more abstract and uncompromising in comparison to the Études. Although this work was at times challenging in terms of its accessibility, one could detect a certain playfulness amongst the somewhat brutal pounding of the first prelude, or follow the steady bassline of the austere second prelude.

Anyone who is only familiar with Sibelius’ most well known symphonies or tone poems would likely be surprised to hear the composer’s Ten Pieces. The first movement, Rêverie, sounds strikingly French–one could almost think it was a lost piece by Debussy. In the third movement, Air Varié, Sibelius sounds like he is having a conversation in music with Tchaikovsky and Bach.

Lindberg’s Jubilees features the same busy, rippling textures which are the hallmarks of the composer’s orchestral style, but restricted to the sound palette of the piano. While this work still has massive, imposing qualities, Lindberg does allow for moments of quiet reflection. Perhaps this work may sound like a piano reduction of one of Lindberg’s orchestral pieces, but it is so idiomatically written (Lindberg is also an accomplished pianist) that it is convincing nevertheless.

Aarre Merikanto is the only composer of this evening’s program who has struggled for recognition, even in his homeland. Similar to the Sibelius, Merikanto’s Six Piano Pieces sounds at times quite French; one could almost hear Debussy’s La cathédrale engloutie in the fourth piece, Melodie. The final selection, Kuutamo (Moonlight), was exceedingly beautiful, evoking a vast, starlit sky.

Salonen’s Dichotomie, as the title implies, illustrates both the mechanical and organic aspects of composition. The first movement, Mécanisme, invokes a machine: rhythmical, mechanical, precise. While the music has a robotic quality it also has a certain brightness and vitality to it. The second movement, Organisme, also features the busy textures of the first, but loses the former’s robotic nature.

Pianist Aura Go is clearly passionate about this music. This was a program which was not only musically diverse but technically demanding, and Ms. Go’s ability to make a convincing argument for each piece was truly admirable. Perhaps Helsinki audiences can look forward to her as soloist in the piano concertos of Rautavaara, Lindberg, or Salonen?