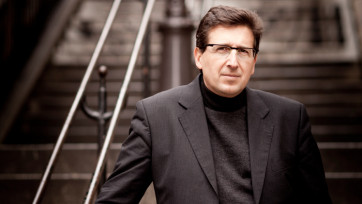 In  2016, music lovers and all music business are going to celebrate the 100th anniversary of one of the greatest French composers : Henri Dutilleux (1916-2013). The Orchestre national des Pays de La Loire and Pascal Rophé (new Music Director since 2014) are already working on this event. Dutilleux shared his life between Paris and La Loire’s river banks near Angers. They just recorded a set of rare and unknow pieces by Dutilleux for the famous Swedish label Bis with four world premiere recordings : Trois tableaux symphoniques and excerpts from a movie score : La fille du diable. Plus Quatre mélodies with orchestra and a third Sonnet de Jean Cassou. A complete recording of the dazzling and rare Le Loup Ballet will open this programme.

The recording session took place in early July in Nantes. This recording will be released in January 2016.

This new recording and first collaboration with Bis Records is a strong symbol of all new projects initiated by the French Pascal Rophé to focus the Orchestre National des pays de la Loire on French orchestral repertoire from the XIXth Century until nowadays. The ONPL is now in a area of big turbulences under the threat of Maine-et-Loire’s Council Departement (a part of the Region Pays de la Loire) to cut unilaterally his budget share from the 1st of January 2016…