Susanna Mälkki is currently the principal guest conductor of the Gulbenkian Orchestra, having previously held the music director positions of the Stavanger Symphony Orchestra and the Ensemble InterContemporain. She is also chief conductor designate of the Helsinki Philharmonic Orchestra; her three-year contract begins in Autumn 2016. In this interview, Mälkki discusses her transition from instrumentalist to conductor, and her thoughts and plans for Helsinki. 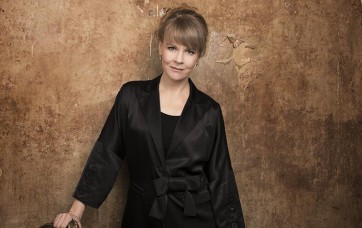 ResMusica: You began your professional career as one of the principal cellists of the Gothenburg Symphony–one of the top orchestral cello positions in Scandinavia if not Europe. However, after only three years you decided to pursue conducting full-time. Did you always aspire to be a conductor, or did other events inspire you to take your current path?

Susanna Mälkki: Actually, the work in Gothenburg coincided with the beginning of my conducting studies. I got the job in Gothenburg at the same time that I got into the  conducting class in Helsinki.

Let’s say that both opportunities were wonderful, and I didn’t want to choose between them. In the beginning, for the first couple of years, I was doing both. I was commuting between the two cities.

I didn’t make any decisions about conducting. Of course, I wouldn’t be able to tell what would happen. It wasn’t that I declared that I would become a conductor. I had a great interest in it, and of course being in the orchestra was a great place to learn about what conductors do. I was sitting very close, and there were very good people and a good orchestra. I could observe and feel, from a musician’s point of view, what is important for them. I think this is really helpful as experience.

In terms of other events–both parameters were there at that time. When I finally decided to leave the orchestra, that was a big decision of course.

RM: You are known as a new music specialist, having been Music Director of the Ensemble InterContemporain. Were you always interested in new music, or did your artistic development just happen to go in that direction?

SM: I think both. I always found contemporary pieces interesting; I played already as a cellist and pianist some modern music. I found it actually easier in a way than the traditional repertoire, because I found that the weight of tradition was very heavy. So, in that sense the connection was always there.

As my conducting career evolved, I think the reason that it (contemporary music) became so dominating in my work was the fact that I was doing it, I was able to do it, and I liked to do it. There are lots of conductors who do not even touch it.

It’s a false image; I’m not necessary a specialist, but I look like one because others are not doing any. Of course, I was working with modern music groups, and then the InterContemporain came very naturally, because I was already in this milieu.

The work has been great. I do like it, and I think it is inspiring, working with composers. It is also very important–we do have a responsibility as performers to do it.

RM: You have just recently been appointed the next Chief Conductor of the Helsinki Philharmonic, beginning in autumn 2016. Tell us about your first professional experience with this orchestra, and how your relationship with them developed to this point.

SM: I have a double history with the orchestra, because I also had some weeks as a principal cello with them right around the time I was going to Gothenburg. So I sat there before I conducted them.

I conducted them a couple of times in my early career. Then there were several years of hiatus; I didn’t work with them until I think 3 years ago, when I did Mahler 1 with them. It was very nice to come back to the orchestra; they changed, I changed. This Mahler I did with them–I felt a very nice musical and artistic connection with them.

I think these things are very instinctive. You can feel them between individual artists or between groups; you feel a certain kind of connection. That’s how I felt. This all evolved in a very natural way. I very happy about this situation now, obviously.

RM: In accepting this position, was there any sense of homecoming, or returning to your “roots”, so to speak?

SM: Definitely, yes. We can start with the language. I can speak with my own language, where I actually understand all the jokes! All cultures have their own codes, and it feels extremely easy to work with people whose background I know–I know many of the musicians, since my studying days. It is very special.

I am so happy about the Music Center; that we have these wonderful conditions. I am also aware of the beautiful tradition that the Philharmonic has in Finnish musical life and history. It’s an honor to be part of this tradition. I feel a great sense of responsibility, and I just want to be worthy of this position, artistically.

I have been really touched by the response when the nomination was announced; how people were overwhelmingly expressing their happiness about it. It feels like « welcome back »; it’s great!

SM: I think proportionally, probably not. As you said, Storgårds had already done a lot, and Segerstam did as well. I think if you really count the numbers of works, you won’t see such a big difference.

There will probably be new kinds of music; composers that have not been played before. I think we have to find a healthy balance. The orchestra is a big institution and it serves the interests of its audiences. Of course, we are not going to change direction entirely.

I also think that clever programming can show the classics in a new light. That is the kind of thing that I would love to be doing. At the same time, the orchestra, or orchestras in general, cannot just stay in the past. We have to ensure that the tradition will continue, and that it will be healthy, but we should not be disconnected from our own time. Playing contemporary music shows that we are living in today’s society, and we are interested in what living artists are doing. As an institution like this, we can’t ignore them.

I think it’s unfair to talk about contemporary music as something difficult or obligatory. I don’t see it that way at all. People are afraid of it for no reason. If you hear something for the first time, then I want to offer interesting things. There is of course a lot of choice, and in that sense I see myself as some kind of a gallerist; I present things I believe in.

So, there will be contemporary music but I do not think the ratio will change.

I also want to say that I am so eager to start working the repertoire with my own orchestra. You can really go into a deeper level when you have a regular relationship. I love the traditional repertoire; I love it just as much as the audiences do. They don’t need to worry!

RM: Are there any particular composers or areas of repertoire which you would like to focus on with the Helsinki Philharmonic?

SM: We are going to focus on certain kinds of music to begin with, and then go into the next area. For example, I think in my first season there will be a lot of French music, old and new. That is also a way to work on the sound palette of the orchestra.

Geography is not a way to analyze music, but it gives guidelines for aesthetics. I think it’s interesting to explore deeper one thing rather than just playing everything all the time.

Having said that, as I already mentioned before, I also have my own ambitions or heart-felt preferences about the traditional repertoire. These are also the things that big orchestras generally play, like Mahler symphonies; they are really the core of symphonic repertoire. Those will be present as well.

The classics are also important, in particular for the quality of the playing.

In three years you can do a lot of things!

RM: How do you plan to develop the orchestra’s profile both in Finland and abroad?

SM: The most essential thing is to keep the musical standards very high; how the orchestra sounds, how they play, what they convey to the audiences. This is really the core.

I think it is important to say, because today people are talking so much about public image and promotion. At the heart of everything is the communication between the musicians and the audiences with the work at hand. If this works very well, the rest will take care of itself. That is what I hope, and that is what I believe in.

We should never underestimate the audiences, regardless of who they are. We have to do justice to the music.

We will do recordings. This is for several purposes, but of course recordings are something that can reach further than the physical audiences in Helsinki. It is also a great way to develop different qualities; such as working on minutiae and details.

We hope to be touring a lot. In Helsinki, we play the same program at most twice. On tour, we may play the same program five or six times, or even more. When the work atmosphere is good, and when the musicians and the conductor are ambitious, then there is development with each performance. Instead of just repeating things, we can go deeper. This is the kind of work that I love doing. I hope we will get lots of opportunities to do this.

RM: Are there any projects that you are planning with the orchestra which you are able to discuss?

SM: No! (laughs) We have recordings planned, but I am not able to say at this point.

There will be some projects which are a little bit out of the traditional concert frame. Working with kids; the Helsinki Philharmonic does a lot of things for children, which I think is great.

We will try to keep it as rich and varied as possible. But really, at the center of everything, is how we play. That is the main thing.

Susanna Mälkki is currently the principal guest conductor of the Gulbenkian Orchestra, having previously held the music director positions of the Stavanger Symphony Orchestra and the Ensemble InterContemporain. She is also chief conductor designate of the Helsinki Philharmonic Orchestra; her three-year contract begins in Autumn 2016. In this interview, Mälkki discusses her transition from instrumentalist to conductor, and her thoughts and plans for Helsinki.