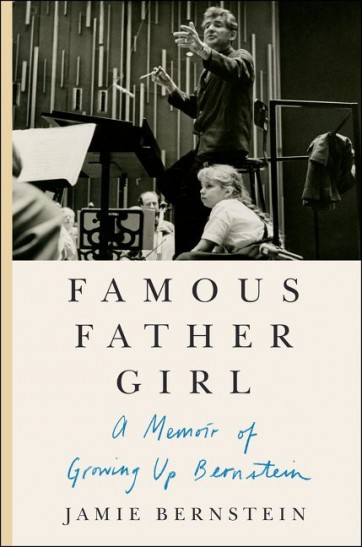 From the first lines of this Famous Father Girl, A Memoir of Growing up Bernstein, a passably inelegant, even frankly indigestible title, the reader quickly discovers little Jamie, oldest daughter (followed by Henry, the dog, then Alexander and Nina) of Felicia and Leonard—whom we’ll call like everyone else “LB.”

She, too. with her wide-eyed stare, like one of Margaret Keane’s children, learns day by day, step by step, about an enchanted, even fairytale world, consisting of sumptuous apartments—like the three that Daddy owns at the Dakota, 72e Central Park West (no less!) which is or was the address of Lauren Bacall (“Betty” to the Bernsteins), José Ferrer, Judy Garland, John Lennon, Yoko Ono, Rudolf Nureyev, etc. etc., a world filled with luxury cars and chauffeurs, zealous and super-vigilant workers, of nurses and cooks with exotic accents (Felicia requires the family to speak English in the house and Spanish in the kitchen),  dependable and faithful (Julia will spend more than 50 years working for the Bernsteins.) It’s a strange world, often eccentric, often fantastic, abnormal, to which Jamie really has to become accustomed.

She therefore constructs, articulates, endlessly hones, a series of portraits, of “photos,” among which the most gripping, will of course be that of Bernstein, her adored and venerated Daddy, who endlessly surprises, frightens and shakes her up.  All in all, during their life together, she will have only one “serious” conversation with him—quickly cut short because the subject is too personal.  Utilizing a warm and touching palette, she depicts her father as intangible, undefinable. He lives on alcohol, sex, cigarettes, on a thousand little orange or blue pills, gets up at 4:00 in the afternoon, has breakfast at 9:00, and imposes his pranks and escapades on the entire household.  There’s no end to the infinite number of his “assistants”—in no particular order, Tommy, Harry, Jeff, Bobby Ted, Mark, Matt—with whom in turn he falls in love and whom Jamie meets at breakfast (the 9 PM meal.) One of them, Charlie Harmon, who seems to have lasted for four years, has recently published (to mark the celebration of LB’s 100th birthday) On the Road and Off the Record with Leonard Bernstein: My Years with the Exasperating Genius, (another serious and measured title!) stuffed with prattle and gossip…But let’s move on…

Eccentricities,  outrageousness, mass hysteria and wildness (how can one resist invoking the life of The Durrells in Corfu?) in this nearly 400-page book, it’s all there: the Dakota, Cape Cod, Fairfield, Tanglewood, friends and their visits,  Aaron Copland, Adolph Green, President Kennedy, William Styron, Seiji Ozawa, Rostro, the mourning (Kennedy, Marc Blitzstein, John Lennon—all three murdered—Blitzstein in Martinique, Lennon, in front of the entrance to the Dakota)– the skiing, the sailing, the formal dinners and receptions with all of New York attending, Karajan, Eliette, the New York Philharmonic, Vienna, the 12 ears of corn that he had for dinner, the roots (Samuel and Jennie, Alexander’s Bar Mitzvah), the failed projects (the « musical » set to a text by Brecht), the Black Panthers (Tom Wolfe would speak of Radical Chic), the lectures at Harvard, the TV series made for children, the illness and death of Felicia, (discreetly referred to by Jamie as « mourning and remorse , ») the recording of West Side Story and the  Carreras « affair, » the humanitarian causes, his file (more than 800 pages) put together by the FBI, M.T.T.(Michael Tilson Thomas), Jamie, Dudamel, Il Sistema, final days and moments—it’s all there. The father, the husband, the lover, the conductor, the composer. It’s all covered there.

There are also the portraits, the « photos » of Felicia, Copland, Nina, Alexander, Mike Nichols, Dick Avedon, Christoph Eschenbach and Julius Frantz, of Lillian Hellman, Harry Kraut, Tommy Cothran, sketched with tact and sensitivity, which  enlighten us even more, as if that were needed, on the subject of LB and help us discover him even further (what E.M. Forster would call the « round character. »)

We know that books about Berrnstein  are legion (Machart, Keller, Simeone,, Seldes, Cott, Burton, Peyser…). This one examines him down to the bones, with a scalpel, with no holds barred, but at the same time, when called for, with delicacy and circumspection, elegance, restraint, prudence, tact—in a word, with love. A moving book, which you read in one sitting, written by the woman who, along with Felicia, Madam Maestro, knew Bernstein best.