A glossy Manon Lescaut in Baden-Baden 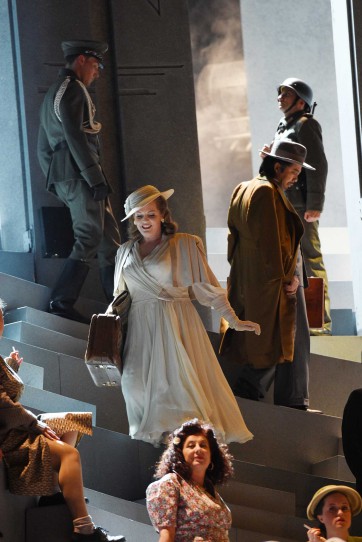 The Berlin Philharmonic Orchestra and its conductor Simon Rattle chose Puccini’s Manon Lescaut to represent the lyrical side of their second passage in Baden-Baden’s Easter Festival. Compared to last year’s opening with the Enchanted Flute, it was a huge stylistic deviation, especially since it was the first time Rattle conducted an opera by the Italian composer.

There can be no doubt about it any longer: the true stars of the show were the orchestra and the conductor. With more players and a piece of work more suited than Mozart’s to showcase its symphonic abilities, the Berlin Philharmonic Orchestra offered an endless and exhilarating sonic splendor. It was an outstanding performance, with intense tutti, translucent pianissimi, velvet strings (the cellos’ pizzicati), perfect solos (especially from the woodwinds).

There are limits, however, to the sonic hedonism which puts the orchestra and its conductor in the forefront: their lack of experience of the pit and of theater in general sometimes showed. They did not have the innate reactivity to the singers and to the stage. Simon Rattle marked the contrasts, and when he liberated the full force of the orchestra, the singers tended to disappear under the instrumental surge, despite their strong build. They were sometimes put in a difficult position by the choice of extreme beats, either suffocated by its slowness (the tenor tried in vain to make “Cortese damigella” go faster) or unsettled by its sudden bits of haste (there were many discrepancies with the chorus). The agreement between the pit and the stage was not perfect in the first act, but it grew better as the performance went on.

Baden-Baden mustered an international all-star cast to face such a Rolls-Royce. Eva-Maria Westbroek returned to Manon, whom she had already played in Brussels, and she was just as involved, sensual and powerful. Yet her tone has become thicker after many vocal-heavy parts; her high notes are less clear and easy, and her voice sounded a little too mature for the part of a young girl. There can be no denying that Massimo Giordano looked the part of Des Grieux, and he did not shy from showing off his powerful high fifth. However, there was no feeling, no trembling, no passion in his old-fashioned and dull acting: a monotonous delivery, scarce in shades and colors. He did not exhibit any truthfulness before the final act, when he had to express his pain. The casting also included Lester Lynch as an intense and brilliant Lescaut, Liang Li as a still young Géronte, remarkable in his vocal integrity, and Bogdan Mihai as a seducing and juvenile Edmondo, somewhat lacking in power. Albeit efficient, the casting did not keep all its promises. Supporting roles were distributed with incredible luxury, as seems to be the custom in Baden-Baden: Magdalena Kožená lent her bronze voice to the madrigal, Kresimir Spiecer offered a charming depth to the music master, and Reihard Dorn made a brief appearance as a captain and an innkeeper.

Richard Eyre’s staging must have been a pleasure for the co-producers from New York’s Metropolitan Opera; its manager Peter Gelb was present at the opening. Its only concession to current trends was the transposition into a Nazi-occupied Paris, which caused a few contradictions with the libretto (prostitutes were probably not deported to America at that time and place) without adding anything to the story. It made Géronte into a collaborator benefiting from his friendship with the Germans, and the final act ended on the death of Manon in the ruins of her private mansion, devastated by the bombings. More than anything else, this was an excuse for Rob Howell’s magnificent (but a bit overwhelming and not very intimate) sets, and Fotini Dimou’s elegant costumes. Within this beautiful frame, Richard Eyre directed the actors very professionally, even though he had trouble creating emotions. From that point of view, the second act was the best, with its wide array of events and atmospheres. As to the intentions of making a piece “of sex and death”, it was limited to a very tame eroticism, in which the most audacious thing was a column with motifs inspired by the Kama-Sutra.