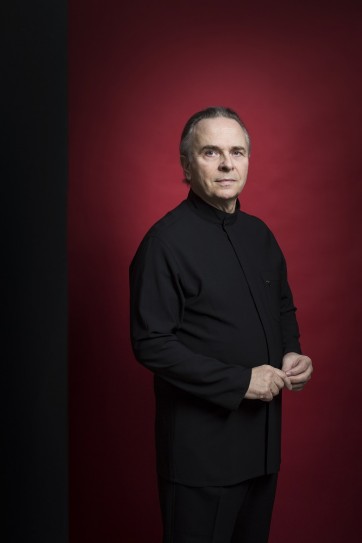 There may not be many obvious stylistic similarities between the orchestral works of Benjamin Britten and Dmitri Shostakovich. Nevertheless, both composers sought to communicate immediately and directly with their audiences, while adhering to traditional concepts such as harmony, rhythm, and the symphony as a form. In this evening’s program, Sir Mark Elder succinctly described these particular qualities in his opening remarks, before presenting war-themed works by these two composers.

Britten’s Sinfonia da Reqiuem was the first work on the program. While the opening timpani strikes were suitably terrifying and menacing, even more memorable was the hushed playing that Elder coaxed from the Finnish RSO strings, in particular the tentative and mournful cellos. Elder’s approach to the first movement was quite deliberate, but the music’s foreboding and inexorable nature was always apparent.

In the second movement, Elder never lost sight of the music’s (albeit grotesque) dance-like qualities. The rapidly galloping triplet passages had a focused yet unbridled quality, from the horns in particular. The wild transition to the third movement was tightly controlled, while the ascent to the final apotheosis was magical. I could easily imagine Elder’s performance of this work to become one of the 21st century references.

Concluding the program was Shostakovich’s massive Symphony No. 7. Elder took a rather legato approach to the opening theme, while still maintaining a sense of (false?) buoyancy and confidence. There is much beauty to the work’s opening minutes, and Elder certainly brought out these qualities. The opening of the « invasion » sequence was almost inaudible, followed by a carefully calibrated buildup to the movement’s shattering climax.

The second movement benefited from Elder’s meticulous attention to detail, while the tentative and fragile beauty of the third movement was supported by the richness of the Finnish RSO woodwinds. The lumbering yet legato low brass in the movement’s rapid central section was particularly effective.

I have always thought of the conclusion to this gigantic work to be a false victory, or not a victory at all. This interpretation was perhaps taken to its ultimate extreme with Elder on the podium–the broad tempo, the extremely strained brass, and lock-step percussion gave an impression of struggle and bare survival. Certainly a memorable conclusion to an already overwhelmingly visceral work.