Herbert Blomstedt in Sibelius and Beethoven 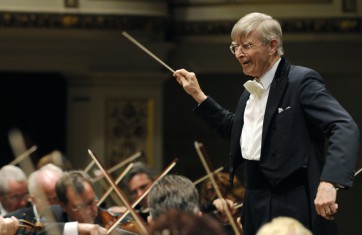 This was undoubtedly one of the great performances of Sibelius’ Symphony No. 4.

Herbert Blomstedt is approaching his 90th birthday and is showing no signs of slowing down. A quick look at his busy conducting schedule shows a deep commitment to the Austro-Germanic and Scandinavian repertoire, so expectations were naturally high in this evening’s program of Sibelius and Beethoven.

The program opened with the darkly introverted Symphony No. 4 by Sibelius. Based on this evening’s account, performing Sibelius with a Finnish orchestra in front of a Finnish audience (that regularly hears the world’s greatest Sibelius interpreters) was a challenge that Blomstedt clearly relished. Blomstedt of course is no stranger to Sibelius, having recorded the symphony cycle during his tenure in San Francisco.

In comparison to Blomstedt’s San Francisco account of this symphony, which was at times a curiously effective combination of glowing warmth and cold objectivity, this evening’s performance was clearly more expressive and rendered with a burning intensity. While the glowing warmth was still present, Blomstedt did not shy away from the opening movement’s more menacing aspects: accents and articulations were sharp, the brass chorales were imposing, the lower strings were weighty and dark. In the second movement, Blomstedt effectively captured the tension between the solo oboe and violins, while capturing every detail of orchestrational color (the stopped horns were particularly memorable). In the third movement, Blomstedt managed to communicate the dark introspection despite adopting a considerably brisker tempo than, for example, Vänskä. The searing central climax felt like a fearless confrontation rather than a cathartic release. Blomstedt brought out the « faux » celebratory tone of the final movement, which provided an effective contrast to the more unsettling elements. Despite the competition, this was undoubtedly one of the great performances of this symphony.

The second half of the program featured Beethoven’s Symphony No. 5, a work that has perhaps defined the concept of a warhorse. For works as popular and well-known as this one, I personally prefer interpretations that let the work’s greatness speak for itself, which is what we had this evening.

Achieving a clear, focused sound was one of the cornerstones of this performance; this was immediately noticeable from the famous opening gesture. In the second movement, Blomstedt found an ideal balance between the noble and the pastoral. Clarity and discipline came to the fore in the third movement; particularly impressive were the skittering sextuplet runs in the strings. The transition to the fourth movement was hushed and magical, leading to a conclusion of irrepressible joy.