On the Road and Off the Record with Leonard Bernstein, my Years with the Exasperating Genius.
Charlie Harmon. Charlesbridge, 260 pages. 2018. $ 24.99. 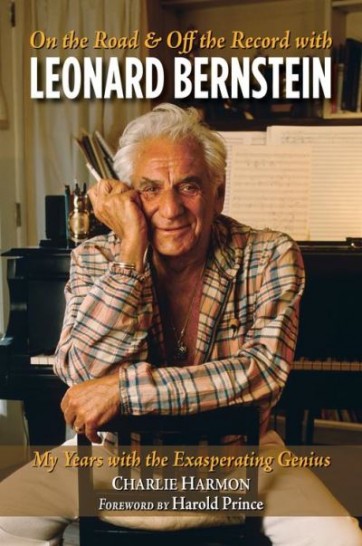 In the little game of drawing familiar analogies, always a bit foolish, it’s true, but still unavoidable, Charlie Harmon’s compilation quickly joins the leading ranks of works published in 2018 on the occasion of the centenary of Leonard Bernstein’s birth, through its qualities of authenticity, sincerity, naturalness— even candor.

As Bernstein’s «assistant,» man Friday, jack-of-all-trades (but also secretary, collaborator, copyiste), Harmon survived more than six years (while others lasted only four days !) of mood swings, anxieties, crises, failures, fits of rage and depression (lack of Dexedrine ?), of disasters and chaos, of touring, and of all sorts of expeditions by the Maestro.

1981 : Hired by the formidable Harry Kraut, LB’s « manager, » in their first « official » meeting, Harmon encounters an unshaven, unbathed, disheveled, drunk, but perfectly tanned Bernstein. He is told that he would be responsable for the mail, phone calls, luggage (some ten to twenty pieces for each trip, this time especially, don’t forget the photos, the two or three bilingual dictionaries, Lewis Carroll’s complete works, the chocolates, the stuffed monkey, pencils, little pills); he would also be responsible for meetings, for the Maestro’s scores, for his socks, breast-pocket handkerchiefs, cuff-links (above all, those given to him by Koussevitzky, that he wears for every concert and kisses, every single time before going on stage), for the three children, the cigarettes, and for the two scotches at 5PM (making sure that the glass is always half-full.)

Harmon then finds out LB’s schedule (and his own) for 1982. The concerts : two weeks in Washington (with the National Symphony), two in New York (with the NY Philharmonic), one in London (with the BBC Symphony), then in Israel and Mexico (with the Israel Philharmonic), la Scala, Venice (homage to Stravinsky?), Washington, Los Angeles, the Hollywood Bowl, Salzburg, Vienna, etc…etc. Lectures, interviews, and other meetings : Stephen Sondheim, Janos Starker, Kiri Te Kanawa, Jerome Robbins, Michael Tilson Thomas (MTT) etc… Friends : Lauren Bacall, Helen Coates, his devoted secretary, Elie and Marion Wiesel, Rostropovich, Ethel and Ted Kennedy, Otto Perl, his tailor, Louis Malle, Ned Rorem, Lillian Hellman, Isaac Stern, Aaron Copland, etc… And always be sure that the glass of scotch is half-full! Above all, don’t forget to fawn over the DGG team which follows the maestro, to cancel Salzburg but keep Vienna and Munich, to arrange a short three-day visit to the Canaries to see Justus Frantz and Christoph Eschenbach, and to attend the rehearsals for Candide in New York… And that’s only for 1982 !

We’ll leave it to the reader to find out what happens next : the allegro con spirito of Haydn’s 88th, that LB conducts immobile, using only his eyes and his brows, the « accidents » at work (because of a lack of Dexedrine), Zeffirelli, William Schuman, A Quiet Place, Radical Chic, the « gay parties, » the Carreras « affair » and recording West Side Story, 27 years after its creation, the thousand aborted projects, such as that trumpet concerto envisioned for Wynton Marsalis, the anecdotes, the endless gossip, rumors, salacious or not, serious or subtle, the quips (they abound, they flourish), the portraits, always applicable– affectionate, warm, always wildly uninhibited—of Julia Vega, who will work for the Bernsteins for more than 40 years, Ann Dedman, Stephen Wadsworth, Danny Kaye, Harry Kraut, Traute von Käppen, and that last look at the Dakota.

It’s clear that Harmon « exposes » a Bernstein who’s often secretive, charming, as well as exasperating (as in the book’s title), volatile. His book, which often skirts biography, passionate, fiery, and frenetic in style and pace, is a perfect complement to the recent portrait by his daughter, Famous Father Girl, rendered so tenderly, so affectionately, by Jamie Bernstein.

The very numerous photos, meant to be appealing, are, sad to say, of very poor quality.

On the Road and Off the Record with Leonard Bernstein, my Years with the Exasperating Genius.
Charlie Harmon. Charlesbridge, 260 pages. 2018. $ 24.99.