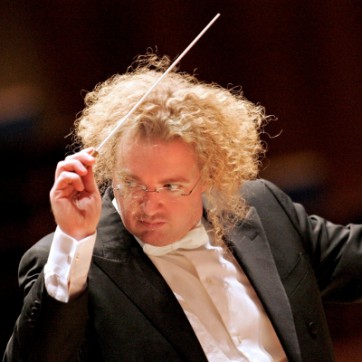 22 November 2013 is the precise day when the British composer Benjamin Britten would have turned 100 years old. To celebrate the occasion, the first half of the evening’s program was focused on his music, with the second half turning to music from early-twentieth century France.

The program opened with an extract from what is arguably Britten’s most famous work, the opera Peter Grimes. Taking place in the middle of Act II, the Passacaglia could be described as a psychological portrait of the protagonist. Over a simple repeated bass line of just five pitches, Britten steadily builds up the tension from near inaudible pizzacati in cellos in basses to a shattering climax, capped with tam-tam. While some interpretations may be more volatile and eruptive, Denève’s approach was a slow boil, with Grimes kept uneasily in check until the final crash, when he explodes. The hushed and absolutely chilling final pages, marking the point of no return for Grimes, featured an excellent solo contribution from principal viola Ilari Angervo and unfortunately some loud coughs.

Britten’s Concerto for Violin and Orchestra seems to have gained a stronger foothold in the repertoire in recent years, which is a welcome development. Similar to the Passacaglia, the concerto is infused with darkness and tragedy, colored by the Spanish Civil War and the impending Second World War. The work begins innocently enough: a simple timpani rhythm, climbing string chords, and bubbly bassoons. The soloist enters with a soaring line, but soon introduces the major/minor ambiguity which will be crucial throughout the piece. An animated section follows, with a repeated-note gesture and arpeggiated triads. The second movement is a wild, somewhat awkward dance, featuring some truly creative effects, such as two piccolos and solo tuba. The final movement, another passacaglia, is unique in that each time the bass line returns, it is transposed a half-step downwards. Britten constantly varies the orchestration with each repetition, creating new sound worlds nearly each time around.

Simone Lamsma was the soloist in this evening’s performance, replacing the originally scheduled Daniel Hope. After some intonation problems in her first entrance, she reached her stride in the second movement, dispensing the formidable double-stop runs with ease and bringing out the music’s snarl and bite. The insistent major/minor ambiguity of the work’s conclusion can sometimes come across as unwieldy. However, Lamsma’s interpretation was thoroughly convincing: a folk lament, full of anguish and yearning.

After the break, the program moved to music from the conductor’s homeland, France. Denève is a Roussel specialist, having recorded the complete symphonies and other orchestral works for Naxos. From the first downbeat of the Symphony No. 3 it was clear that this would be a special performance. Denève drew out confident playing and many orchestrational details in the motoric first movement. The second movement is the emotional core of the work and builds up to a massive, radiant climax, while the final two movements evoked a colorful and celebratory atmosphere. The orchestra and Denève were clearly enjoying themselves here.

Although an audience favorite and a textbook example of orchestration, Ravel himself was dismissive of the minimal musical substance in Bolero. Essentially a crescendo lasting a quarter-hour, Ravel endlessly repeats a single theme with constantly varying orchestration, over an incessant snare drum. The music finally breaks shortly before the end, with a surprising modulation leading to a wild, bombastic conclusion. While La Valse would have been a far better example of Ravel spinning his music out of control, this performance of Bolero was nevertheless great fun.

This was an excellent, intelligently programmed concert (all works were written within a 20-year time frame) and the Finnish RSO should reengage Denève as soon as possible.