The XXth-century US at the Folle Journée de Nantes

From January 29 to February 2 (and between January 24 and 26 in the ten regional cities), the twentieth anniversary of La Folle Journée de Nantes was celebrated with a wide-ranging overview of the American twentieth century, under the theme “from the canyons to the stars.” The 97 percent rate of attendance (144,468 tickets were sold out of 150,000) is the second-best result ever for the festival, after its Chopin edition (98 percent). The very daring program provoked some apprehension, which disappeared as soon as the ticket office opened, with a new audience made up of young people. 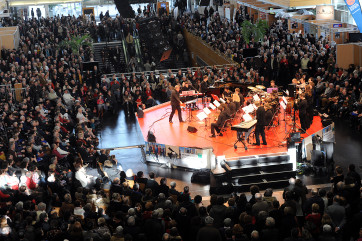 The audience’s rejuvenation is a direct consequence of the program, which was built around four axes: the musical roots of the new continent (traditional songs and the European legacy, with works by Foster, Ives, and Gershwin, and then Bernstein, Cage, Reich, Glass, and Adams), the United States as a land of hope (with works by European musicians who crossed the Atlantic as refugees or immigrants, such as Dvořák, Rachmaninov, Prokofiev, Korngold, Stravinsky, and Schoenberg), American institutions as commissioning entities (with works including Ligeti’s Ramifications, Stravinsky’s Symphony of Psalms, Dutilleux’s Métaboles, Messiaen’s Des canyons aux étoiles, and works by Berio, Pärt, and Murail), and the cinema (Korngold, Herrmann, Mancini). Jazz, Negro spirituals, the blues, and musicals were also represented.

The main characteristic of this event was the huge number of works and composers who are otherwise never or rarely played in France. For example, it was possible to listen to Amy Beach (1867–1944; extracts from Four Sketches, op. 15 and The Hermit Thrush at Morn, op. 92, no. 2, performed by Etsuko Hirose and Two Pieces, op. 102, by Marie-Catherine Girod); the String Quartet no. 3 in A minor by Ernö Dohnanyi’s (1877–1960), played by the Modigliani Quartet; extracts from the Preludes, op. 10–13 by Abram Chasins (1903–87), performed by the young German pianist Joseph Moog; choral works by David Lang (b. 1957), including “Oh Graveyard,” “Evening Morning Day,” and ”For Love Is Strong,” by the Vox Clamantis ensemble; The Ambient Air by Louise Talma (1906–96) performed by Hurel (flute), Tomescu (violin), Demarquette (cello), and Girod (piano). The Ballet Mécanique by George Antheil (1909–59), written for a film by Fernand Léger and Dudley Murphy’s in collaboration with Man Ray, “the first film without a scenario,” with four pianos and other instruments on stage, had not been played for many years.

Musicians also offered unknown sides of their personalities, which surprised and awed the audience. For example, Jean Dubé, who is known for his interpretation of Liszt, offered a masterful “American” recital, including The Sanctuary by Jósef Hofmann (1876–1957), the Sonata, op. 26 by Samuel Barber (1910–81), and An American in Paris by George Gershwin (1898–1937), arranged by William Merrigan Daly (1887–1936). Japanese pianist Etsuko Hirose, with her very fine playing, delivered a most unexpected energy in The Alcotts by Charles Ives (1874–1983) and in the Sonata no. 1, op. 22 of Alberto Ginastera (1916–83). Different Trains, by Steve Reich (b. 1936), a minimalist piece with a prerecorded track, allowed the Modigliani Quartet to broaden their horizons. Romain Guyot and Raphaël Sévère revealed new aspects by playing the concertos for clarinet of Artie Shaw (1910–2004) and Aaron Copland (1900–90). Marie-Catherine Girod, tireless in her efforts to publicize lesser known pieces, usually French ones, tackled American composers influenced by postromanticism and by Debussy: Three Tone Pictures op. 5 by Charles Griffes (1884–1920), the Étude de concert, op. 36, by Edward MacDowell (1860–1908), and the Five Pieces, op. 6, by Arthur Foote (1853–1937).

New players also made themselves known, or better known. While music lovers are already familiar with Rémi Geniet, Francesco Tristano, the Tana Quartet, or the Les Esprits Trio, the names of Joseph Moog, Bruce Brubaker (piano), Irène Duval (violon), or Aurélien Pascal (cello), among others, remain barely known in France.

Players coming straight from America itself should not be forgotten. The young violinist Tai Murray held her audience captive with a program of repetitive music (Cage, Adams, Copland, and Bernstein, with Shani Diluka at the piano) and with Bernstein’s Serenade for Violin and Orchestra, played with the Poitou-Charentes Orchestra conducted by Jean-François Heisser. Murcof, a Mexican electronic musician, worked on sonorities by transforming live those produced by Vanessa Wagner’s piano when playing Cage, Adams, Glass, and Morton Feldman (1926–1987). The Crossroads Quartet offered another approach with “Barber Shop,” a friendly place where men sang together while their hair was being dressed. The Negro spirituals of the American Spiritual Ensemble, under the direction of Everett MacCorvey, were electrifying: during the last performance, the musicians invited the entire audience to sing in a tremendous explosion of joy. 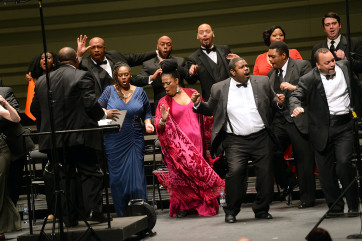 While various halls hosted these concerts, the main hall, renamed “Central Park” for the occasion, was occupied by concert bands in which students from the neighboring conservatories played such standards as the scores of West Side Story, Star Wars, or works by Duke Ellington and Gershwin.

That was, in short, the Folle Journée américaine. It was so tightly packed (227 paying concerts and 34 free ones, 47 conferences, and 20 concerts outside Nantes, performed by 1,800 artists) that it would be impossible to describe everything. Next year will see a return to the past and the year 1685, which saw the birth of Johann Sebastian Bach, Georg Friedrich Händel, and Domenico Scarlatti.

From January 29 to February 2 (and between January 24 and 26 in the ten regional cities), the twentieth anniversary of La Folle Journée de Nantes was celebrated with a wide-ranging overview of the American twentieth century, under the theme “from the canyons to the stars.” The 97 percent rate of attendance (144,468 tickets were sold out of 150,000) is the second-best result ever for the festival, after its Chopin edition (98 percent). The very daring program provoked some apprehension, which disappeared as soon as the ticket office opened, with a new audience made up of young people.