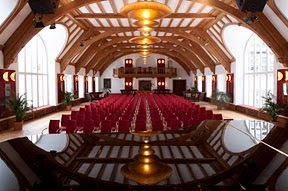 Located in Bavaria near the Austrian border, the Castle of Elmau is well- known in the world of classical music. Since the 1950s, it has become a famous concert hall, due to the renowned quality of its acoustics. Passing through the region, Benjamin Britten discovered and instantly fell in love with the site and in 1959, with his partner Peter Pears, he founded a British-German Chamber Music festival there. In 1974, they presented the world premiere of their Canticle n°5,  » The Death of St. Narcissus « . Other famous artists in the classical music world are closely linked to Elmau : Wilhelm Kempff, the Amadeus Quartet, Yehudi Menuhin, and many others . In the hall, they found a unique atmosphere to focus on music in the beautiful setting of the Bavarian Alps. 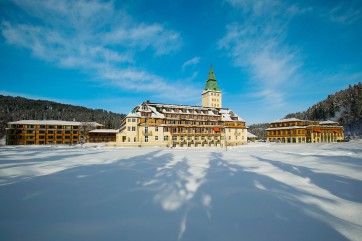 Throughout the year, the castle offers various festivals, which are added to its regular programming. Part of January is traditionally devoted to a Chamber Music Week, whose theme in 2014 was « Europe ». Throughout the week, this theme was explored by international top-level soloists, illustrating aspects of the Old World . The festival featured current stars, such as Lisa Batiashvili , Emmanuel Pahud , Paul Meyer, Eric Le Sage, Ilya Gringolts , Vilde Frang and the excellent Franco-German cellist, Nicolas Altstaedt (winner of the 2014 International Classical Music Awards, in the Chamber Music category). In addition, we discovered young musicians, like the Turkish Borusan Quartet and the young Spanish pianist, Judith Jáuregui .