The Ring in Geneva : a crescendo in aesthetics 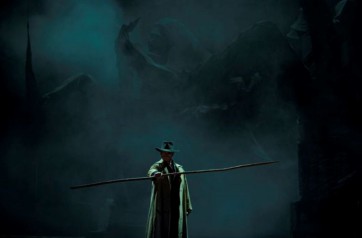 With its perfect narration of the legend, the depth of its direction, and an aesthetic sometimes deliberately distressed by a Brechtian desire to expose the seams, the beautiful Die Walküre imagined by Dieter Dorn for the Grand Théâtre de Genève last November was captivating from beginning to end and created a certain eagerness for its sequel. That eagerness was fully satisfied throughout the wonderful Siegfried staged by the German director with all the sense of wonder necessary to set images to that monstrous four-hour long opera for kids.

There could be no doubt left at the end of the second installment of the Ring cycle: Dorn will not offer an audacious or innovative Ring, as has become (for better and for worse) a tradition. No trashy rereading, no realistic update: Wotan will not be a shark from Wall Street, and Siegfried will not be a teenager in sneakers smoking crack in a garbage dump. It is rather something like a Ring for everyone.

Dorn tells the Ring very clearly, but don’t be misled: he does not fall back upon the cardboard kitsch of our ancestors, with its animal pelts, braids, and horned helmets. By contrast, his artistic vision suits the fairytale marvels that characterize Siegfried as well as the passions and cosmic matters of Die Walküre; the production is a constant enchantment.

It was a pleasure to get reacquainted, from the first chord to the last, with Dorn’s red-bordered “picture frame,” which draws the spectator’s gaze far into the depths of the stage where Dorn sets his visions. The frame is used to masterful effect at the beginning of act three, when the stage is entirely empty, reminiscent of Kupfer’s well-known “road of time” at Bayreuth in 1988, an image which was never more powerful than when it was bare, freed from all the structures that sometimes burdened it.

Here the curtain rose extremely slowly upon Wotan alone in front of strange, misty woods; a very beautiful and intriguing vision, maybe the most convincing of all, together with McVicar’s metallic brambles at the Rhine Opera in 2007. The lighting is perfect (as is true of the entire production), as is the fascinatingly slow-moving smoke. Wotan made Mime’s forge appear suddenly in the middle of the stage: a complex construction on several levels, reminiscent in some places of the stage in act two of Die Walküre, but better. This was an ingenious set that allowed act one to proceed at a very fast pace, very different from the tunnel-like scenery of less inspired productions.

The woods were back in act two and they were even more disquieting, almost moving. Monstrous roots abounded—or maybe they were the dragon’s paws? The trunks of the stylized trees displayed human bodies: Who were they? What were they doing there? Fafnir’s meals, soon to be digested? The phantasmagorical woods, wonderfully lit, raised many questions in the spectator’s mind. The fight with the dragon was a very memorable scene. The dragon itself was very intriguing: half a Méliès-like moon and half an octopus, with its three faces grimacing with pain, a triple Scream à la Munch, displaying the excesses of greed. Act two is often laborious, but here, it passed like a dream.

Compared to Die Walküre, there are fewer moments when Dorn deconstructs his own art—an effect often referred to as stripping the stage bare, but not really the case here. The crescendo of theatrical effects was evident in this production, except during the whispers in the woods scene, when the cruder lighting showed too clearly the bodies moving among the tree trunks, and in the birds flying around the hero, manipulated by puppeteers clad in black.

I must apologize for having mocked in a previous article a toybox Grane (Siegfried’s horse), which here makes for a very beautiful awakening scene in act three. Even though the scene with Erda could have been developed further, this was another great act. Following Chéreau very closely, Dorn offered nothing more than the director of the centennial Ring did for this exchange, the apex of the score. (For example, why did he not take advantage of the very beautiful silvery dress of the goddess, which could be clearly seen only during the curtain call?)

The entire ending was beautiful, but it could have told us even more than what we already knew, with Brünhilde waking up as she did in Chéreau’s staging, with loose clothes in shades of blue having replaced under her shield the usual Valkyrie gar; Still, Chéreau’s idea was so beautifully obvious that it is impossible not to approve of the return of this key moment inthe history of directing Wagner’s masterpiece. 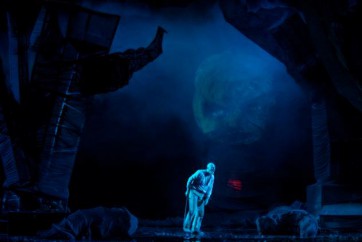 The undeniable success of this show would have been less so without the topnotch singers gathered on the stage of the Grand Théâtre.

Straight from his appearance as Klingsor in Castellucci’s recent Parsifal, Tomas Tomasson’s kingly Wanderer was a superb revelation after Tom Fox’s exhausted Wotan: his dark and very precise elocution was captivating from “Heil dir weiser Schmidt!” onward. His projection was perfect, his theatrical gestures of great class, and his face riveting. Even during the exchange with Erda, less discursive and more lyrical in its vehemence, Tomasson never forgot the text’s intent, beyond the necessity of the vocal power.

Andreas Conrad’s Mime was absolutely compelling, and even though all Mimes are (from Stolze to Zednik, it is hard to remember one Mime in trouble), the precision of his elocution and his projection constituted an exhilarating vocal and theatrical performance.

As for the Wagnerian comprimarii, John Lundgren’s Alberich managed to impress in the one scene he was in: he had the same vocal and theatrical qualities as his light counterpart. Dressed as he was, it was very easy to understand how he almost manages to grab the god’s spear during their childish brawl. Furthermore, Dorn offers him (and it is rare in such an unrewarding scene) one of the most beautifully staged moments of the evening, with the storm arising twice when the god appears.

Regula Mühlemann had the difficult task of being the first female voice to be heard, after more than two hours into the show. (At the end of act one, a frustrated female spectator could be heard saying, “I don’t know if I’ll be able to hold out for four hours!”). The young Swiss singer was blameless in that brief moment of virtuosity once entrusted to Joan Sutherland by Decca.

Maria Radner’s beautiful Erda used her soothing tones to deliver her only scene, negotiating well all the registers of her part.

All these parts, as short as essential to the forward motion of the plot, allowed the two heroes to shine without restraints. Although her Brünnhilde only had thirty minutes onstage, Petra Lang seemed to take great delight in facing the moment when many (even in Bayreuth) cannot help but letting their anguish show during the vocal buildup to the test of their high notes. Lang’s interpretation was not flawless (only a few top notes eluded her, despite the nice way she managed the vocal line), but it was beautiful nonetheless, and her pleasure in being there was infectious. Her acting was subtle. Just as in Die Walküre, this was a convincing incarnation of a luminous Brünnhilde, the icing on the cake that was the show.

Let us finish with John Daszak’s Siegfried. This is an overwhelming part, and indeed a few high notes here and there were overwhelmed, but it seemed to be only the result of a lack of concentration, for the competence was clearly there. (There was no problem with the song at the forge, sung as if he were in the shower.) After the difficult beginning of act one, where Daszak seemed to run after the racing orchestra, the bet was won. Despite his age, this bald Siegfried managed to be a hero far younger than most wig-wearing Siegfrieds, with the help of an approach to his staging well managed by Dorn and Jürgen Rose’s accurate costuming.

Ingo Metzmacher, conducting the Orchestre de la Suisse Romande, pursued the chamber music–style Wagner heard in Die Walküre. Certainly no one would have wanted to invade Poland after hearing the sounds he created—not even Woody Allen in Love and Death!

This was a very beautiful and intelligent production. Next April should offer us a Götterdämmerung just as fascinating.