Philharmonia Orchestra on Tour in Salzburg 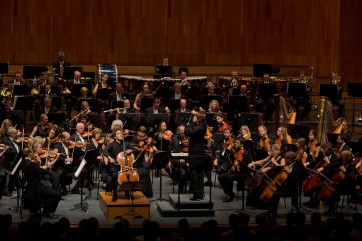 One, two, three women; ten, twenty, thirty… No doubt about it, the orchestra entering on the stage of the Grand Hall of the Salzburg was not the Vienna Philharmonic Orchestra, which is still effectively opposed to any form of equality between men and women in its ranks. The Philharmonia, invited for a brief residence of two concerts in Salzburg, is considered a modern orchestra; where the Viennese seem to sort of stand to attention between two pieces, the musicians of the Philharmonia chat and joke in a lively way: it’s like a breath of fresh air.

It’s not clear what the specific project was that led Alexander Pereira to invite the British orchestra, other than the need both to perform the entire Bruckner opus structuring the programme of concerts this year and to render homage to Richard Strauss. This shows the invitation to be an essentially pragmatic decision, reflecting the lack of invention and intellectual coherence in the programming of concerts right through the unsuccessful tenure (2012-2014) of Pereira. This, however, was satisfying enough so that, this time at least, there was not really anything to blame him for.

The satisfaction, to be honest, is more for the first concert than for the second. The Vier Letzte Lieder that opened the concert, however, amply displayed the quality of the orchestra, which was less concerned with producing a beautiful sound than with the general substance of the piece it was performing, and the accompaniment of the fourth Lied, for example, was a miracle of melodic plenitude. Camilla Tilling, replacing Eva Maria Westbroek, has perfect Straussian lines; but her voice occasionally disappeared behind the orchestra, and the melodic plenitude often meant sacrificing the sound of consonants. In the Bruckner, Dohnanyi did the scherzo very well. It was delicate and light; but the two other completed movements of this last work often lacked depth of field. Due to the fact that sound layers are not differentiated, strings and winds are jumbled up into a mishmash of material, jeopardising the ever-changing equilibrium of the orchestra.36 hours later, the sound image lights up with an intelligent programme joining together three works composed in the space of a quarter of a century, before and after the First World War, which is one of the main themes of the year at Salzburg as elsewhere. Before the interval, we witnessed the apotheosis of programme music with Strauss’s Don Quixote: for many they were listening for the first time to Maximilian Hornung, a rising star of the cello world, who conceived Strauss’s hero-comic character in an audacious way. But it was the orchestra, influenced by its musical director, which thrilled here. This work, certainly the least marmoreal of Strauss’s symphonic poems has all the brio and instrumental inventiveness required. In the last years of the 19th century, Wagner is no longer an insurmountable model.

A completely different form of modernity opened the second part: Esa-Pekka Salonen did not seem to accord much importance to the post-romantic heritage that profoundly nourishes the Three pieces for orchestra of Berg, composed only 15 years after Don Quixote.

Until now one there had been only snatches of waltz, whether from Berg or with the start of Baron Ochs from Strauss. With Ravel’s La Valse, the queen of ballroom dancing was apotheosised in a way that looks like an apocalypse. Salonen’s interpretation here was eloquent: this was not a carefree society tossed into the abyss as intended by Ravel, but a society whose very heedlessness leads it there of its own accord. In a year commemorating the centenary of 1914, such a programme is certainly not the result of chance and is as admirably designed as put into practice.